Fighters from the Islamic State group parade in a commandeered Iraqi security forces armored vehicle down a main road in the northern city of Mosul, Iraq, on June 23, 2014
AP
By Alex Altman

In 2011, the Somali Islamist group known as Al-Shabab took to Twitter. Its official handle taunted the group’s enemies, boasted of battlefield triumphs and shared images from the front lines of conflict zones. It sparred with political antagonists, rattling off missives in grandiose English. The terrorists—like the site’s less murderous users—used Twitter to share news and promote their brand. In 2013, a Shabab account live-tweeted commentary as allied fighters carried out a terrorist attack at a Nairobi shopping mall.

Terrorists love Twitter. That includes the Islamic State of Iraq and Greater Syria (ISIS), the Sunni Muslim extremists whom the U.S. is targeting in an expanded military campaign. ISIS has emerged as the most sophisticated group yet at using the service to spread its bloodthirsty message. And when ISIS jihadists and tens of thousands of acolytes swarmed Twitter in recent months, it raised the question of how social media sites should respond when unsavory groups colonize their platform.

There are no easy answers. Social-media networks exist so users can share information; sites like Twitter are neither equipped nor inclined to police large numbers of rogue feeds themselves. And within the intelligence community, there is no consensus on whether the use of sites like Twitter as a propaganda tool hurts or helps U.S. interests.

To some observers, Twitter was derelict in allowing extremist accounts to flourish. “For several years, ISIS followers have been hijacking Twitter to freely promote their jihad with very little to no interference at all,” says Rita Katz, director of the SITE Intelligence Group, which studies jihadi extremists’ behavior online. “Twitter’s lack of action has resulted in a strong, and massive pro-ISIS presence on their social media platform, consisting of campaigns to mobilize, recruit and terrorize.”

Others say it’s not so simple. “There is a case to be made for removing the content or removing the most prolific [jihadist] accounts online. Each time that happens, they had to rebuild their audience. It has a disruptive effect,” says counterterrorism expert Clint Watts, who has studied ISIS’s behavior online. But ISIS accounts may also, in some cases, be a boon to intelligence-gathering efforts. “Their braggadocio tells us what we don’t know about what’s happening in eastern Syria,” Watts says. “In Iraq they show us every one of their successes. There is value in that.”

For that reason, some government officials may prefer the accounts remain open. “There is some value to being able to track them on Twitter,” says William McCants, a former State Department senior adviser who directs the Project on U.S. Relations with the Islamic World at the Brookings Institution. McCants recalls that a U.S. intelligence official described the site as a “gold mine” of information about foreign-fighter networks, better than any clandestine sources. The State Department is using Twitter itself, with a counter-propaganda campaign run through an account, Think AgainTurn Away. It tries to nettle ISIS and neutralize their recruiting.

A Twitter spokesperson declined to comment for this article. The site’s rules prohibit threats of violence, harassment and other abuses, and government agencies or law enforcement officials are able to request the removal of prohibited content. In 2013, it received just 437 such requests from governments worldwide; it received 432 in the first half of this year.

In recent months, Twitter has cracked down on some accounts, including those sharing macabre images or videos of the beheading of American journalists James Foley and Steven Sotloff. But it is not trawling for the content that some government officials believe has the greatest potential to convert potential conscripts. “This is not necessarily a bloody picture. It’s somebody telling you to go kill,” says Alberto Fernandez, coordinator of the State Department’s Center for Strategic Counterterrorism Communications, whose digital outreach team is responsible for the Twitter counter-messaging campaign. “That discussion is not being taken down by Twitter.”

It’s easy to see why terrorists flocked to the platform. Beginning in the mid-2000s, al-Qaeda has been organizing online through bulletin-board forums, which were largely password protected and sometimes required special contacts to gain access. Moderators would scrub signs of dissension. In contrast, Twitter is something of a digital town square—a free megaphone to reach a mass audience, easily accessible on smartphones and largely unmonitored.

As ISIS fighters began capturing vast swaths of Syria and Iraq this summer, its network of online organizers—there are around 30 key players, according to analysts who study global extremism online—tweeted about territorial gains, posting photographic proof of their conquests. They softened their hard-edged image by sprinkling in common humanizing touches, like pictures of meals and cute cat photos. And they set about trying to recruit more conscripts—including Westerners—to the cause.

It may seem incongruous; religious extremism is in large part a renunciation of modern society, while the social-media platform is both emblem and enabler of the networked world. But since it is impossible to scrub all pro-ISIS sentiment from Twitter, U.S. analysts are trying to use the service to piece together a better understanding of the terrorist group’s dynamics. Twitter’s decision to silence some accounts but not all is fine, McCants says, and watching the group latch onto a new account when a big one is blocked can be instructive. “When you knock one of them down, it’s interesting to see how quickly they reconstitute and who their earliest followers are,” he says. “Those are the guys that are plugged in.” 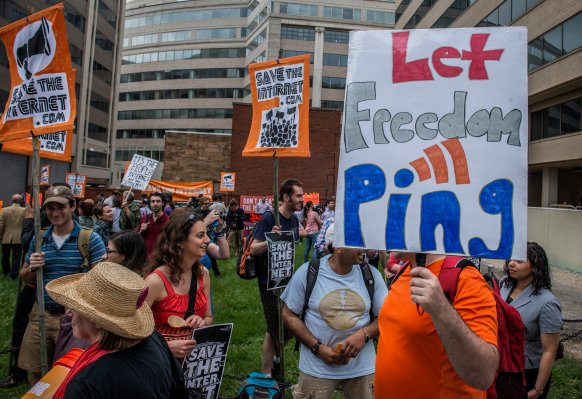 Congress: Ok, Ok, We Hear You On Net Neutrality
Next Up: Editor's Pick