On the Anniversary of 9/11, Committing to National Service as an American Value

Regina Best, 40, of Dallas, TX who served in the Air Force from 1996-2003 works with Noel Williams on the Habitat for Humanity "Veterans Build" project on the National Mall Wednesday June 5, 2013 in Washington, DC.
The Washington Post—Getty Images
By Condoleezza Rice and Robert Gates

On 9/11, we are reminded of the dangers of the world, but also of the strength and mutual care exhibited by Americans in response to tragedy. It is appropriately both a day of remembrance and of service.

On this particular anniversary, we are seeing the revival of threats some thought, or hoped, were dormant. The images of brutality by the enemy are almost, once again, too difficult to bear, recalling the emotions of more than a decade ago.

Now, as then, we should be conscious and intentional about all the elements of American power and influence. One response (appropriately) is to oppose and preempt rising threats. But it is important, in the end, not just to demonstrate our capabilities, but also our values and identify – not just what we should do in the world, but who we are.

This is the typically American response to global challenge. The nation of Operation Overlord on D-Day was also the nation of the Marshall Plan. The country that conducted the Cold War also gave birth to the Peace Corps. Both elements of national power are real, practical and needed.

In the aftermath of 9/11, we witnessed the patriotism and courage of hundreds of thousands of young Americans who volunteered to serve in our military, and we watched in awe their dedication and bravery as they fought our enemies.

We saw the important role that committed volunteers played – in the Foreign Service, in the Peace Corps, and in private and religious organizations – in shaping the world’s perception of America. A program such as the President’s Emergency Plan for AIDS Relief (PEPFAR) – which has increased goodwill toward America across sub-Saharan Africa – was implemented by a partnership of idealistic people both inside and outside government.

This is sometimes referred to as “soft power,” but there is really nothing soft about it. America’s global image is a valuable national asset. And it is something that citizens of every background and belief, in very practical ways, can build and foster both abroad and at home.

A representative survey of the more than 200,000 Peace Corps volunteers who have served since 1961 tells a remarkable story. More than 9 in 10 said the Peace Corps improved the perception of the United States globally; nearly three-quarters believed it helped the U.S. adapt to globalization; two-thirds said it improved U.S. foreign policy; and more than half believed it improved our national security. Nearly every returning Peace Corps volunteer would recommend it to their child or other family member.

Americans could also use a larger dose of national service here at home. Over the last 20 years, for example, more than 900,000 people have served through AmeriCorps, a program President George H.W. Bush seeded, President Bill Clinton launched, and President George W. Bush expanded. Imagine what it could mean for the country if we had a similar number serving their communities each year.

A movement with this goal has emerged to make the idea of a “service year” for young people a normal, expected part of a successful life. There are advantages, of course, to a volunteer himself (or herself). At a time of stagnant social mobility and widening gaps in education and opportunity, service is a proven pathway to better skills and to a feeling of social contribution.

But there are clear advantages to America as well. As our military has become smaller and more specialized, fewer young people have the experience of uniformed service. And many have lost confidence in the ability of our nation to do big things together. American citizens risk feeling atomized, isolated and helpless. So General Stanley McChrystal and a group of leaders have signed our names to a plan of action to make a year of national service a common expectation and opportunity for all 18-28 year olds.

Service could be military or civilian, with groups like Teach for America, Earth Conservation Corps, Habitat for Humanity and Global Health Corps. A small living stipend would be paid to ensure any young person, regardless of background and income, could participate.

Youth from different backgrounds, regions, income and education levels, and political and religious affiliations would be brought together in common purpose to solve problems and restore some semblance of national unity. A service year would also translate into course credit in college and a service credential of value to employers.

America – with serious divisions at home and serious threats abroad – needs sources of healing, unity and common purpose. National service is a powerful idea whose time has come.

Condoleezza Rice served as Secretary of State and National Security Advisor to George W. Bush and is a professor at Stanford University. Robert Gates served as Secretary of Defense under both George W. Bush and Barack Obama and is former President of Texas A&M University. Both are members of the Leadership Council of the Franklin Project on national service at The Aspen Institute. 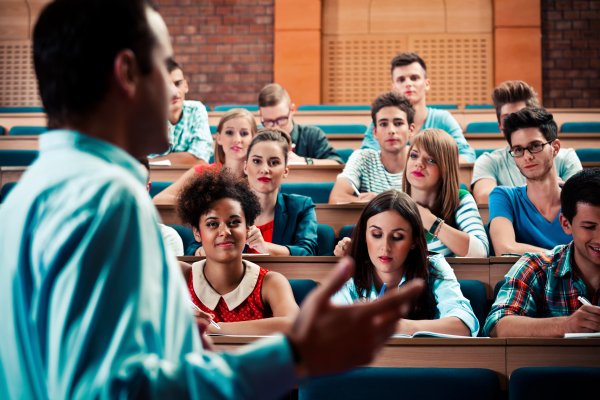 Welcome to College—Now Please Stop Thinking
Next Up: Editor's Pick