Tell me you weren’t expecting something like this: Xbox One sales in Japan, where the console just launched on September 4, are bad. Make that really bad.

According to Japanese game mag Famitsu, Microsoft’s games console sold just 23,562 units during its first four days on the market, September 4-7. Contrast with the Japanese Xbox 360 launch back in December 2005, which sold 62,135 units in half as many days, or the original Xbox in February 2002, selling 123,929 during its launch weekend.

Sony and Nintendo game systems have historically sold better in Japan, so it’s no surprise that figures for their respective launch windows are much higher: Sony’s PlayStation 4 sold 322,083 units during its first two days on the market (in November 2013) and the Wii U moved 308,570 units during its initial two days of availability (in November 2012). In Japan, that makes the Xbox One one of the most poorly launched mainstream game consoles on the books (the best remains the PlayStation 2, which hit 630,552 units sold during its preliminary weekend).

Microsoft’s original Xbox sold fewer than half a million units in Japan over the course of its life, and the Xbox 360’s only fared slightly better: presently somewhere north of 1.6 million units sold in the country. Nintendo’s Wii U–no trailblazer itself sales-wise–just crept past Microsoft’s nine-year-old system in units-sold last February.

By contrast, the Xbox One, while presumably behind Sony’s PlayStation 4 in worldwide sales given Microsoft’s reluctance to publicly lock horns with Sony sales-figure-wise, has sold in record numbers (relative to prior Xbox systems) in the U.S. At last check, back in April, the Xbox One had sold 5 million units across the globe, and it’s launching in 29 new markets this month. None of them immediate game changers, but it’s a significant shoring up of the availability gap between the Xbox One and the more broadly available PlayStation 4.

On September 4, Microsoft’s Aaron Greenberg weighed in on the company’s reluctance to publish worldwide sales figures:

He’s talking in part about Halo: The Master Chief Collection (strictly rehash, but all four Halo core games fully remastered and immaculately packaged) and racer Forza Horizon 2. Microsoft’s been hyping Sunset Overdrive, an irreverent third-person shooter by former Sony-exclusive studio Insomniac Games (the Ratchet & Clank and Resistance games), so there’s that, and maybe Ori and the Blind Forest, a platformer that’s arguably the most interesting of the bunch, but it’s not yet a lock for 2014. 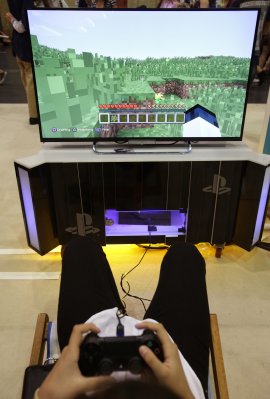 Microsoft Aims to Buy Minecraft for $2 Billion, Reports Say
Next Up: Editor's Pick