Aaron Craft of the Ohio State Buckeyes reacts after losing to the Dayton Flyers 60-59 in the second round of the 2014 NCAA Men's Basketball Tournament at the First Niagara Center on March 20, 2014 in Buffalo, N.Y.
Jared Wickerham—Getty Images
By Nate Rawlings

On paper, the 2014 NCAA tournament featured a tough field and no shortage of story lines for basketball fans—Wichita State went into the tournament undefeated at 34-0, Florida was a favorite in many pools, a surging Louisville looked to defend its title from a tough draw and a No. 4 seed. But when it comes to the opening rounds of March Madness, anything is possible, and the tournament’s first full day didn’t disappoint.

But the opening round can’t be kind to every would-be Cinderella team. N0. 4 seed Louisville squeaked past Manhattan 71-64, after the defending national champs were down by three points with less than four minutes remaining in the game. Later, No. 5 seed St. Louis rallied from a 14-point deficit to come back and beat North Carolina State in overtime.

And then there was the buzzer-beater. After a missed three pointer with time expiring, Texas needed a last-second layup to put Arizona State out of the tournament.

Day 1 also saw strong teams taking care of business: No. 1 seed Florida handled Albany 67-55 and No. 2 seed Michigan had little trouble dispatching Wofford 57-40. The other half of the field takes to the court on Friday to close out the opening round of what has already been an exciting start to March Madness.

Most Popular on TIME
1
TIME Replaced Its Logo on the Cover For the First Time in Its Nearly 100-Year History. Here's Why We Did It
2
Exclusive: Alleged Hunter Biden Emails Circulated in Ukraine
3
Watch Live: The Final Presidential Debate 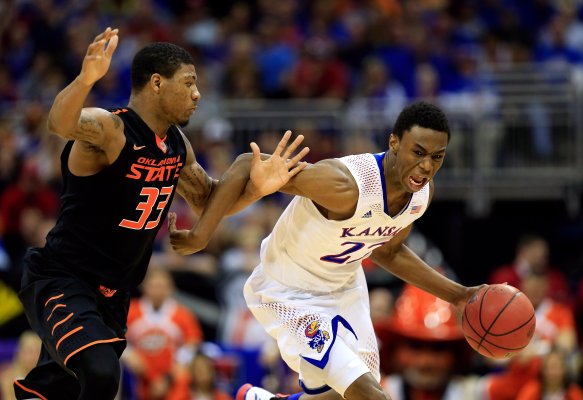 11 Players to Watch in This Year's March Madness
Next Up: Editor's Pick