Understanding the ISIS Threat to Americans at Home

A resident of Tabqa city touring the streets on a motorcycle waves an Islamist flag in celebration after Islamic State militants took over Tabqa air base, in nearby Raqqa city, Syria, on Aug. 24, 2014
Stringer—Reuters
By Massimo Calabresi

President Barack Obama will tell the country Wednesday why he is stepping up military action against the terrorist group that calls itself the “Islamic State in Iraq and Syria”, also known as ISIS or ISIL. His biggest challenge may be reconciling for war weary Americans his administration’s conflicting messages about whether the group poses an immediate homeland threat to the United States.

On the one hand, Attorney General Eric Holder has said western fighters joining ISIS and returning home radicalized are the national security danger he worries about most. “We are seeing, I would say, an alarming rise in the number of American and European Union nationals who have been going to Syria to help extremist groups,” Holder told TIME last month. “This represents a grave threat to our security,” he said.

But in a thorough presentation on Sept. 3 at the Brookings Institution, outgoing director of the National Counterterrorism Center, Matthew Olsen, presented a less scary picture. ISIS has no cells in the U.S., Olsen said, “full stop.” Further, Olsen said, “we have no credible information” that the group “is planning to attack the U.S.” ISIS, Olsen said “is not al Qaeda pre-9/11.”

So is the group a direct threat to Americans at home, and is Obama right to increase military action against the group?

Holder says the danger comes from the combination of westerners joining ISIS and the expert bomb-makers working for the al Qaeda affiliate in Yemen, Al Qaeda in the Arabian Peninsula (AQAP). It is not clear what if any evidence exists of such collaboration yet. On the one hand, AQAP has issued statements in support of ISIS, and both groups are active in Syria and Iraq; on the other, al Qaeda and ISIS split in the last year after a debate over tactics and territory.

Several senior administration officials tell TIME they have seen no evidence of direct contact between individual members of AQAP and ISIS.

That said, ISIS doesn’t have to threaten Americans at home to warrant military action against them abroad, U.S. officials argue. The group’s military successes in Syria and Iraq threaten U.S. and European interests in the Middle East, Obama says. “We did an assessment on the ground,” Obama told Meet The Press on Sept. 7, and concluded that to protect American personnel and diplomatic facilities the U.S. needed “to launch air strikes to ensure that towns like Erbil were not overrun, critical infrastructure, like the Mosul Dam was protected, and that we were able to engage in key humanitarian assistance programs that have saved thousands of lives.”

And the potential threat of ISIS targeting the U.S. in the future is real, administration officials say. More conservative observers like Olsen agree that it is better to go on the offensive against ISIS now than to risk them becoming a bigger threat to Americans later. “ISIL poses a multi-faceted threat to the United States,” Olsen said at Brookings, and it “views the U.S. as a strategic enemy.” He says ISIS, “has the potential to use its safe haven to plan and coordinate attacks in Europe and the U.S.” Foreign fighters joining ISIS, “are likely to gain experience and training and eventually to return to their home countries battle-hardened and further radicalized,” Olsen says.

“Allowed to proceed on the path they’re on, in other words, left unchecked, they would turn their sights more to the West and potentially to the United States,” Olsen says. That, presumably, is the case Obama will make to the American people on Wednesday evening. 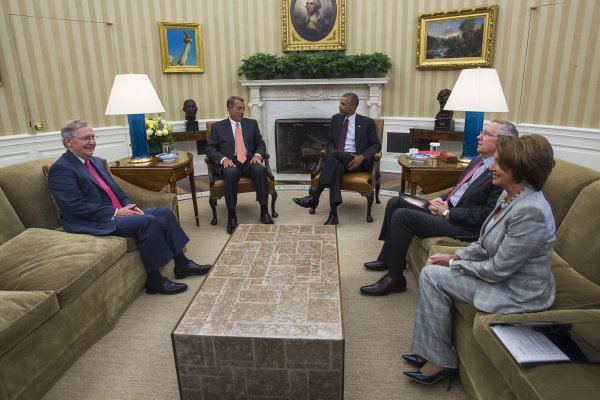 Obama: I Can Hit ISIS in Syria
Next Up: Editor's Pick