This week, a leading technology company released a new product that may represent either the pinnacle of its achievement or a showy gadget that’s a tribute to needless conspicuous consumption. I don’t mean Apple’s iPhone 6 Plus or the Apple Watch, unveiled in Cupertino on Tuesday. I’m referring to Tivo’s announcement of a DVR so capacious and expensive, it belongs in the lair of a comic-book billionaire supervillain.

The Tivo Mega, which the company says will go on sale next year, has 24 terabytes of storage. That’s “tera” as in “tera-bly excessive.” It’s enough disk space to record over 26,000 hours of video. That’s three solid years’ worth of standard-definition television programming. (Which, using all six tuners constantly, will take you half a year just to record.) Or it’s enough to watch for, say, nine years straight if you watch eight hours of shows a day, after which you will drop dead. And it will retail for a suggested price of $5000.

It goes without saying that no one needs this device. I watch TV for a living and I don’t need it. Sure, like anyone with a DVR, I’ve had times when I wished I had a little more space. But for $5000? I’ll buy a few episodes from iTunes if they get deleted!

I’m sure there may be some specialty applications for the product–say, as a massive database for TV-decency groups recording every program on the air to catalog the dirty words. Otherwise, this seems more like a statement purchase, a la Hubert Keller’s $5000 hamburger, or the $30,000 Superplexus puzzle from the Hammacher Schlemmer catalog.

That’s if you look at the Mega simply as a showy, materialistic purchase, that is. But seen another way, it could be a kind of poetic statement, akin to performance art: a dramatic, even satirical commentary on the plight of the modern media consumer in the age of TV abundance.

Any TV fan today, after all, knows there’s too much good stuff to keep up with–even if you only watch the good stuff. You stay up late on Sunday night, set your Tivo, and that still leaves you struggling to watch it all by the time next Sunday rolls around–never mind the other nights of the week. And that’s not considering all the archival, imported and binge-watching series on Netflix.

The Mega is sold on the premise of reducing this kind of anxiety: never worry about running out of room again! And maybe it does that, but at the cost of creating a new kind of anxiety. Here is three solid years worth of TV programming! And if you somehow manage to watch it all straight, without breaks for eating or sleeping or sex, your Tivo will have had enough time to record another 18 years of TV! And while you watch that, it can record 108 years! [Note: this math assumes the subsequent purchase of additional Tivo Megas, which, given that you blew $5000 on one already, is a fair enough assumption.]

Even if we achieve the singularity, even if your consciousness can be kept alive forever as a TV-watching brain in a jar, you will never, ever catch up. And that won’t happen anyway. You will die someday. You have a life to live in the meantime. You have a job to do, family to raise, an immense world to engage with. There is never enough time, and every day you have less of it. Record all the TV you want–at some point you must accept your days are numbered and you must make choices. There are things you will never see, experiences you will never have, whether they are saved on your hard drive or not.

Maybe the Tivo Mega is an expensive denial of this fact, or maybe it’s an ingenious reminder. Maybe it’s a brilliant, even poignant monument to Fear Of Missing Out–to the experience of living in a world of digital distractions and recommendations that just keep coming like chocolates on Lucy’s conveyor belt, faster than you can stuff yourself with them. In the endless plain that is the digital mediasphere, it is Ozymandias’ statue: Look on my “Shows to Watch” list, ye mighty, and despair!

Or maybe it’s just a nice gadget I can’t afford. More well-heeled TV fans than I may buy the Mega and enjoy it, and God bless them for it. But I prefer to see it as a $5000 darkly comic joke, whose punchline is: you can buy space, but in the end, you can’t buy time. Maybe Apple will invent something that does that. 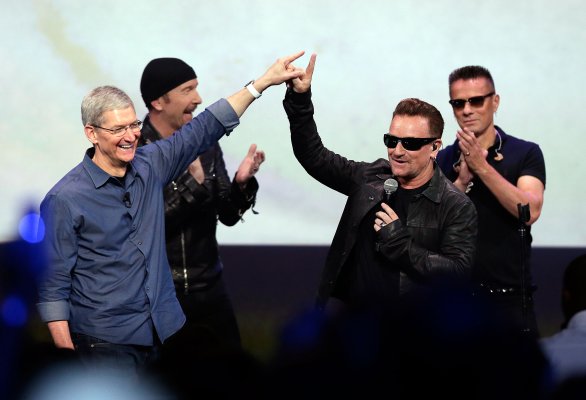 Bono On U2's Not-So-Free iTunes Album: "We Were Paid"
Next Up: Editor's Pick