The rumors were true—Apple is indeed releasing a smartwatch. The Apple Watch (sorry, “iWatch” fans) will be the first big new product line Apple has introduced since the iPad in 2010, and the first under the leadership of Tim Cook as CEO.

Like the iPad, iPhone and iWatch before it, the Apple Watch will enter a market where other tech companies have tried and failed to reach a mass audience. As with those earlier products, Apple hopes that a mixture of sleek hardware design and easy-to-use software will convince millions to buy a device they never even knew they needed.

Here’s everything you need to know about the Apple Watch:

You Need an iPhone to Use It

Like many smartwatches, the Apple Watch is meant to be used in conjunction with a smartphone. Think of it as as an easier-to-reach display that can relay information from your phone—when someone sends you a text, for instance, the Apple Watch can display the message on its screen for easier access. Though the watch was unveiled along with the iPhone 6, it will also be compatible with the iPhone 5, iPhone 5s and iPhone 5c.

It’s Expensive and It Won’t Be Out Soon

Shocker—Apple is introducing a gadget at the very high end of the category’s price range. The Apple Watch’s retail price will start at $349 when it launches early next year. Samsung’s Galaxy Gear retailed for $299 last fall, while the Kickstarter-funded Pebble smartwatch costs $150. Apple products typically sell at a premium, which helps the company maintain its huge margins.

It Has Animated Emojis

Everyone’s favorite yellow emoticons will have more verve on the Apple Watch. Users will be able to customize the facial expressions of emojis by touching different portions of the figure’s face. For instance, users can touch the emoji’s mouth to widen its smile or tap its eyebrows to raise them higher. The 3D figures spring to life before being texted off to a friend also using an Apple Watch. The redesigned emojis are a way to compensate for the fact that the Apple Watch screen is prohibitively small for sending traditional text message to friends. In addition to animated emojis, Apple Watch will analyze incoming texts and present a selection of potential responses that might make sense in context. Users can also use the phone’s microphones to dictate text.

The new device is part of Apple’s broader scheme to replace your physical credit card through Apple Pay, a service that allows people to buy products through the press of a button on their iPhone 6 or Apple Watch. Utilizing Near Field Communication (NFC) technology, the devices will be able to communicate with payment systems at participating retailers using credit card information they already have tied to their iTunes accounts.

So far, McDonald’s, Staples, and Macy’s are among the companies that have agreed to accept Apple Pay.

It’s Using the Watch Dial in a Creative Way

The iPod’s click wheel was an innovation that simplified the chore of navigating through a thousand songs on an MP3 player. Apple hopes it’s hit on similar design magic by turning the traditional watch dial—now the “Digital Crown,” in Apple PR-speak—into a button that can be used to navigate the watch face. Through the dial, users will be able to zoom in and out on the screen, as well as scroll up and down, without obscuring the watch’s small surface. It also serves as the home button and the way to call up Siri, who will return as the Apple Watch’s digital assistant.

It’s Got a Boatload of Fitness Features

Fitness apps are seen as key to gaining a foothold in the wearables market. At the Apple Watch unveiling, Apple heavily promoted the ability of the watch to be a personal trainer as well as a communications device. The Apple Watch will use an accelerometer and GPS technology to constantly track the activities of its wearer, whether he or she is jogging, cycling or on a leisurely walk. The watch will also encourage users to meet basic fitness standards like standing up a bit during each hour and getting at least 30 minutes of physical activity per day.

It Has Three Different Models in Two Sizes

You Can Send Someone Your Heartbeat

Apple spent a lot of time at its press event talking about how the Apple Watch is the most personal device it’s ever created. Case in point: a user can “send” someone else their heartbeat by pressing two fingers to the Apple Watch screen to allow it to measure a pulse. Users can also share sketches, sound recordings and wrist-based love-taps for other forms of 21st-century flirtation.

Apple claims that the technology inside its watch will allow it to both give and receive tactile feedback with quite a bit of subtlety. The vibration system, called Taptic Engine, provides haptic feedback that varies based on the context—for instance, the device would vibrate differently depending on whether you needed to make a right or a left turn while using a navigation app. The Apple Watch’s touch screen will also be able to differentiate between a tap and a press, which would should present more control options on the very small amount of available real estate.

With the Apple Watch not slated for release until 2015, Apple still has a lot of questions to answer. How’s the battery life? The fact that the company crowed about the iPhone 6’s improved battery life but was silent on Apple Watch may not be a good sign. We also want to know whether it’s water resistant, whether there will be a version for lefties and which app developers will be on board at launch. 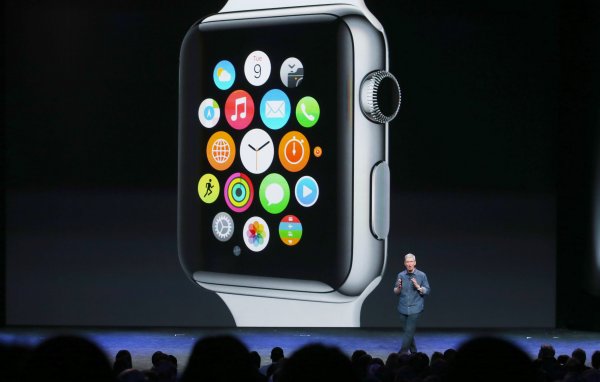 The Apple Watch Will Have Animated Emojis
Next Up: Editor's Pick