Read more about the Apple Watch in this week’s TIME magazine.

The iPhone 6 was finally unveiled Tuesday during Apple’s highly anticipated product announcement. Tim Cook first unveiled the iPhone 6—featuring bigger screens, a digital wallet, better cameras, among other features—before unveiling the Apple Watch. The Apple Watch won’t be out until next year, but the iPhone 6 is coming this month.

Here are 10 things to know about the new iPhone:

Apple Pay, a mobile payment system on the new iPhones, is trying to replace wallets.

In Apple’s first push into the payments game, the iPhone 6 is equipped with Apple Pay and a Near Field Communication (NFC) antenna that allows you to tap your phone against a sensor to make payments. Credit cards from participating companies—Visa, Mastercard and American Express—can be linked to your phone’s Passbook. Several merchants, like Disney, Chipotle and Seamless, have signed on with more to come.

On the security front, your card information is encrypted, and each transaction has a one-time payment number. So if you lose your phone, you can simply cancel its payments as opposed to the card itself. Apple also emphasized that neither the retailer nor Apple will know what you purchased, where you purchased it, or how much you paid.

The phones’ cameras are the most advanced iPhone cameras yet.

The iPhone 6 has an eight megapixel iSight camera, a 1.5µ pixel sensor and a ƒ/2.2 aperture lens. “That’s a nerdy way of saying, we’ve made the iSight camera a lot better,” according to Apple.

There’s an all-new feature called Focus Pixels that’ll help the iPhone cameras focus faster and better than ever. This means better video, and slow motion functions, too. You can even take “burst selfies,” with the iPhone 6 able to take up to 10 photos per second.

Battery life on the new iPhones is equal or better to the old models.

The iPhone 6 Plus, however, offers the best battery life of any iPhone to date. It has 80 hours of audio and 24 hours of 3G talk, and its standby battery life is 16 days.

The new phones have barometers to sense elevation.

The iPhone 6 has an air pressure sensor to tell you how high up you are. That will help it better record your fitness activity in that running a mile uphill will be adjusted to count more than running a mile on flat ground. This fitness data can be stored, accessed and analyzed in the iPhone’s new built-in Health app, a hub to record your health data and link third-party apps that also track your movements.

The iPhone 6 is much faster.

With 802.11ac Wi-Fi, the iPhone 6’s Wi-Fi speeds are up to three times faster than those of the iPhone 5s. The iPhone 6 also has faster LTE than the iPhone 5s, and it can make use of more frequency ranges than other iPhones, making for better roaming capabilities.

Landscape views on the new phones will now be compatible for Mail, Weather and even the Home screen. A second pane will appear in landscape for some apps, like Mail. Keyboards on landscape will also be modified to make typing easier: additional characters will be placed on the sides of the traditional keyboard so users don’t have to tap an extra button to access them.

A reachability function will allow you to continue to use the iPhone 6 with one hand.

A double tap of the Home button will make the top of the screen roll down, so people with shorter thumbs or smaller hands can still use the iPhone with only one hand. Double tap the Home button again, and the iPhone 6 returns to its normal configuration.

The iPhone 6 and iPhone 6 Plus will be available in the U.S., Canada, United Kingdom, France, Germany, Australia, Hong Kong, Singapore and Japan on September 19. You can pre-order them starting Sept. 12. If you can’t wait, you can download iOS 8—the iPhone 6’s new operating system—for free on Sept. 17. 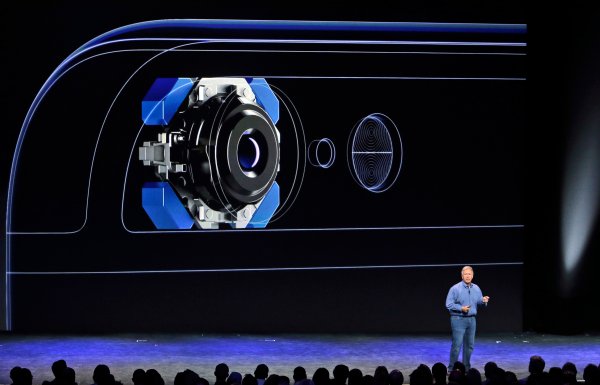 The iPhone 6 Will Have Apple's Most Advanced iPhone Camera Yet
Next Up: Editor's Pick