After months of frenzied speculation, CEO Tim Cook on Tuesday introduced what Apple hopes will be the next must-have device: a wearable computer called the Apple Watch.

Apple is positioning the device as “the most personal device we’ve ever made,” according to Cook. “We love to make technology more personal and allow our users to do things they never imagined,” he added. The device will start at $349 and be available in early 2015.

Now that the most-hyped gadget in the history of hyped gadgets is finally here, what is it and what does it actually do?

The basics: Apple took a computer, shrunk it, and slipped it into a curved watch casing. It runs a modified version of iOS, the iPhone and iPad operating system. It will come in two distinct sizes and a broad range of configurations.

Using a rotating dial on the side, called the digital crown, the watch can be manipulated without obscuring the screen, a major problem with other smartwatches. Its display is a curved touchscreen made of an ultra hard material. The screen technology can understand the difference between a tap and a more forceful press. The watch features a system that can give haptic and audio feedback, depending on how a user is manipulating it.

There are four sapphire lenses on the back of the watch that can detect pulse rate, for example. The watch also features wireless charging. There will be 6 different straps available. Straps can be swapped in and out quickly.

To make up for the smaller screens, the device relies heavily on Siri, the company’s voice-activated assistant.

Among the features executives demonstrated at the long-awaited unveiling: built-in software that tracks how many steps you take and how hard you are exercising, suggesting fitness goals.

Digital Touch, another app the company showed off, is intended to let Watch wearers communicate with one another. Users can send each other small, animated drawings that are transmitted back and forth.

And, much like Apple’s other iDevices, developers will be able to make apps for the device.

The Apple Watch is dependent on having an iPhone nearby to feed it information from the Internet or GPS. The watch will be compatible with iPhone 5 and 6 models. Whereas the iPad, when it debuted in 2010, was essentially an oversized iPhone minus the ability to make calls, the watch appears to be a companion device.

Analysts believe the market for so-called wearable devices is about to take off. In the next few years, people will be spending between $30 billion and $50 billion annually on wearables, ten times more than today, according to BCG Research. If they’re right, a lot of that will be the Apple Watch. Morgan Stanley analyst Katy Huberty predicts Apple will sell about 30 million to 60 million shipments within a year, faster than any other new Apple product ever. 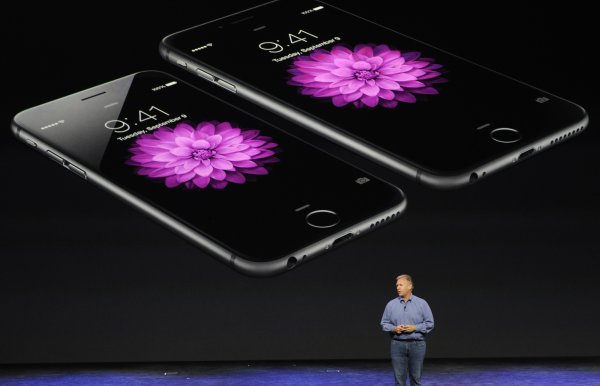 Apple Announces Plans to Reinvent the Wallet
Next Up: Editor's Pick