A leaflet on a table in McDonald's advertises discount on chicken McNuggets at a branch in Shanghai on April 9, 2013.
Peter Parks—AFP/Getty Images
By Dan Kedmey

McDonald’s posted its worst monthly sales decline in more than a decade in August, according to new figures the company released Tuesday, as same-store sales dropped precipitously in Asia and ebbed across the rest of the world.

Asia Pacific, Middle East and Africa led the downturn, with a 14.5% drop in sales in August. The overall sales drop of 3.7% was the worst since February of 2003, the Wall Street Journal reports. Sales fell fastest in China and Japan, after news broke of a supplier in Shanghai attempting to pass off expired meat to its customers, most prominently, McDonald’s.

Sales across Europe slipped by 0.7%. A rare bright spot of growth in the United Kingdom was offset by store closures in Russia due to official allegations of “sanitary violations,” which the company has appealed and critics have said might be political retaliation for western sanctions against Russia.

Rounding out the global slump was a 2.8% drop in U.S. sales, which the company attributed to an increasingly competitive marketplace. 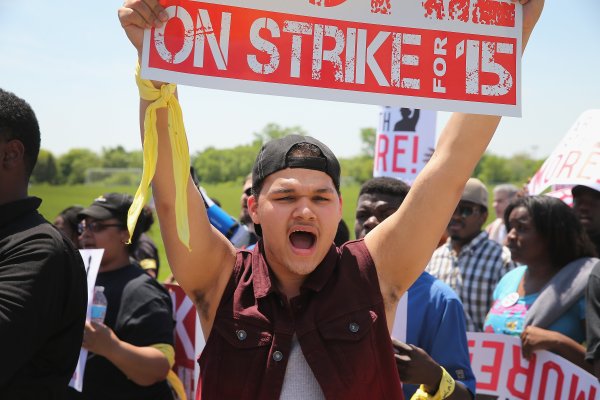 Fast Food Workers Strike in 150 Cities
Next Up: Editor's Pick