Philip "Phil" Schiller, senior vice president of worldwide marketing at Apple Inc., speaks about the iPhone 6 and iPhone 6 Plus during a product announcement at Flint Center in Cupertino, California, U.S., on Tuesday, Sept. 9, 2014.
Bloomberg—Bloomberg via Getty Images
By Matt Vella

Apple on Tuesday said it would try to reinvent the humble wallet by entering the payments business. At an event in Cupertino, Calif., during which the tech giant unveiled a raft of new products, CEO Tim Cook showed off Apple Pay, a system to make paying for things simpler and faster.

“Whether it’s a credit card or a debit card, we are totally reliant on the exposed numbers and out-dated strip on the back,” said Cook. “This is exactly what Apple does best,” he went on. There are some $12 billion worth of debit and credit transactions in the U.S. daily, according to the company, or 200 million transactions.

Apple is using NFC technology to communicate between its devices and point-of-sale systems. The company is partnering with big banks like Barclaycard and Bank of America for Apply Pay. The company said it would launch with partners representing 83% of credit card volume in the U.S. and add more over time. There are about 220,000 merchants that already have compatible point-of-sale systems, but Apple is also partnering with stores including Staples, Subway, Duane Reade, Whole Foods, Disney and others to adopt the technology. McDonalds is even adding Apple Pay technology to its drive-throughs.

“We are not in the business of collecting your data,” said Eddy Cue, Apple’s senior vice president of Internet Software and Services. Cue went on to say Apple will not know what you bought or where you bought it. “It’s fast, it’s secure, and it’s private,” Cue said.

The system will be available in October on iPhone 6 models. 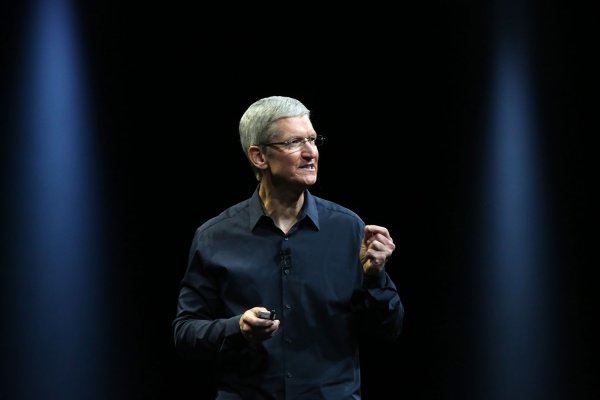 How to Watch Apple's iPhone Event Live
Next Up: Editor's Pick