When your brand is as well known as Polo Ralph Lauren, it’s hard to get people excited about it. (Collared shirts — we get it.) So the folks at the label decided to get something going by creating a new type of runway made of mist. In a lake. In New York City.

On the evening of Sept. 8, fashionistas including at least one Jenner offspring and many Laurens were driven in golf carts (these people wear heels) to The Lake, as it’s known, near Cherry Hill on the west side of Central Park. Shortly after 9 p.m., a sprinkler head rose from beneath the surface and formed a 60-ft-high halo of mist. The models walked out into the fog — or at least, they appeared to. With New York City shimmering in the background, and Central Park foliage in the foreground, the modes’ images were projected onto the droplets of water by what the Polo folks were calling 4D technology. (Physicists and pedants would have pointed out that the show had maybe three dimensions and not even close to four, but this was not that kind of crowd.)

The hologram-like approach had the advantage of being able to take viewers to a bunch of locations in New York City without forcing them to leave the comfort of their park benches: the Brooklyn Bridge, Dumbo, the High Line, a different part of Central Park, all pretaped when those locations were empty. The models, who were even taller than usual, appeared to be walking on water, like an army of messianic dreamgirls in cheerful solids. There was even a holographic Ralph, taking his bow and doing a little dance step in the lake while the real Ralph looked on. The effect was spooky and otherworldly, but very very cool.

While the Polo folks were calling the event “a sensory experience that uses innovative technology that could forever change the landscape for a fashion show,” it’s hard to see this getting widespread acceptance, amazing as it was. Perhaps it solved the vexing problem of models who arrive late for shows, but the punctual ones aren’t going to be replaced by wraiths of mist filled with light any time soon.

Check out the video above, but watch out — it sneakily cuts away to a different, clearer video, for people who actually want to see, you know, the clothes. But you get the idea. 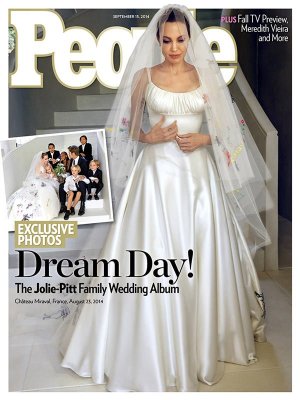 Here's How Much It Costs to Get Your Veil Embroidered Like Angelina's
Next Up: Editor's Pick