Dutch experts have released a preliminary report into the fate of Malaysia Airlines Flight 17, which crashed in the Donetsk region of Ukraine on July 17, saying that the plane was hit by “high-energy objects.”

All 298 people on board, including 193 Dutch citizens, died in the incident.

The report is the first official paper to come from the Dutch Safety Board, which is heading an international investigation into the crash. However, investigators still have not had a chance to examine the crash site as fighting between pro-Kiev and pro-Kremlin forces continues nearby.

“The initial results of the investigation point towards an external cause of the MH17 crash. More research will be necessary to determine the cause with greater precision,” said Tjibbe Joustra, chairman of the Dutch Safety Board.

The Boeing 777 flight was heading to Kuala Lumpur from Amsterdam when it exploded over conflict-torn eastern Ukraine. Although most experts believe the plane was shot down by pro-Russian rebels, the Dutch report was careful not to assign blame, but did point to the absence of evidence of technical failure from either the aircraft or crew.

“The pattern of damage observed in the forward fuselage and cockpit section of the aircraft was consistent with the damage that would be expected from a large number of high-energy objects that penetrated the aircraft from the outside,” said the report.

The Dutch Safety Board hopes to produce a final report within a year. 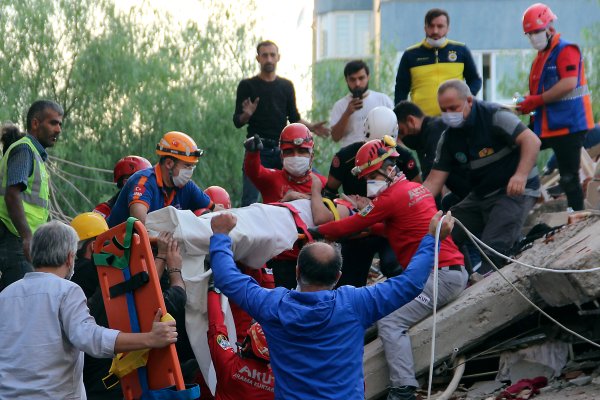 At Least 30 Died in Earthquake That Hit Turkey
Next Up: Editor's Pick