She still considers herself the “loud mouth” and “fog horn” her father teasingly called her as a child, but Sen. Kirsten Gillibrand said Monday that she is not going to say which colleague called her “porky” after the birth of her second child, or which elderly senator told her not to slim down too much because he likes “my girls chubby.”

Those disclosures in her book, “Off the Sidelines,” which is due out Tuesday, made waves when they were printed in People Magazine last week. While taken aback by the clamor to disclose her critics’ names, Gillibrand says she knew that chapter—the one about her struggles with her weight—would be “the one every women’s magazine would excerpt,” she tells TIME. “I use these illustrations as an example of much larger point. It’s important to have a debate about how women are treated in the workplace. I’m not alone in having someone say something stupid. It’s less important who they are than what they said.”

The New York Democrat is using her book to promote her push to engage more women in politics. She holds her own life up as an example of finding a way to have it all: the big career, two young sons and loving marriage. “We need new and better policies that support women and allow all women to rise,” Gillibrand writes. “We need to end the cycle of women studying hard, starting careers, climbing through the ranks, taking time off to care for children, and never again finding a job as good as the one they left.”

Gillibrand is frank about the hardships: dispiriting credit or criticisms over her appearance, being unable even now to afford full time help and coming home from Congress to clean the bathroom when you have three men in the house (boys, apparently, don’t have great aim). But she also waxes poetic about the good she feels she has been able to accomplish: passing health care for the 9/11 first responders, tackling sexual assault in the military and on college campuses and repealing Don’t Ask Don’t Tell.

Gillibrand emphasizes that her flexible schedule in the Senate is what allows her to do it all. “These challenges that I face are common and not surprising, and I have it so much easier than working moms,” says Gillibrand, whose husband works in New York and lives up there for most of the week, leaving Gillibrand to care single-handedly for their two young sons in Washington. “I don’t have to be at work at a certain time.”

She writes about the importance of being unabashedly ambitious without the fear of seeming like, well, a bitch. “I was nicknamed Tracy Flick, the aggressive, comical, and somewhat unhinged blond high school student played by Reese Witherspoon in the movie Election,” Gillibrand writes. “It was a put down to me and other ambitious women, meant to keep us in our place. Yes, I’m competitive. I fight for what I believe in, and I drive hard toward my goals. Does that make me ruthless and crazed? No.”

Too many women, she argues, sit on the sidelines because they fear ambition. She says she timed the book to come out just before the midterm elections because she hopes to inspire more women to go out and vote, and to realize that political ambitions of their own are more achievable than they may think. But, when asked if she has further political ambitions in life, Gillibrand is clear about being happy where she is—and that her legislative plate is full with a reauthorization of the 9/11 First Responders bill and another pass at getting prosecution of cases of sexual assault in the military removed from the chain of command. Her bill fell six votes short of breaking a filibuster earlier this year.

She says she doesn’t want to run for governor and hasn’t the slightest intention of seeking the Democratic nomination for President in 2016 against presumed front-runner Hillary Clinton, her predecessor in the Senate and who wrote the glowing forward to Gillibrand’s book (“For Kirsten,” Clinton writes, “public service isn’t a job. It’s a calling.”).

But the book tour still means she gets asked questions about her future ambitions.

“Will you run for President?” I asked her on Monday.

“What if Hillary doesn’t run?”

“Are you ruling it out?”

“Which will come first, a third kid or running for President?”

“Oooh,” Gillibrand said, “That is such a hard question. I think they’re both off the table. Probably having a third—probably have a third would come first if I could convince my husband. I’d love having a third.” 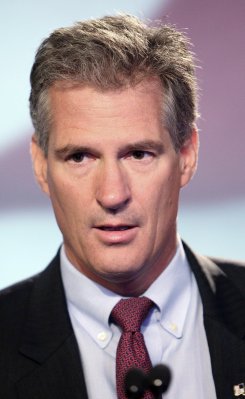