The 2014 Elections Are the Most Expensive Ever Held in India

A rally for BJP Prime Ministerial candidate Narendra Modi in Siliguri, Darjeeling, on April 10, 2014. Voter mobilization, campaigning and advertising costs have made this the most expensive Indian poll ever
Hindustan Times—Hindustan Times via Getty Images

India’s 2014 elections are the world’s biggest exercise in democracy, with a price tag to match.

The nation’s politicians are expected to spend around $5 billion on their campaigns, which, in terms of expense, makes these polls second only to the U.S. presidential elections (they hit the $7 billion mark).

According to the initial findings of an election expenditure tracker by the Centre for Media Studies, three times more is being spent on the 2014 polls than was spent in the last general elections in 2009.

While part of this increase is because of significant inflation, much of it is a reflection of the changing expectations of a younger, increasingly demanding electorate.

“You are dealing with a new generation of 150 million voters who like to see a sense of scale,” says Dilip Cherian, founding partner of Perfect Relations, a communications group and a political campaign adviser. He says even small details, like the kind of seating being provided at rallies, are being subtly upgraded to meet demands.

“The quality of chairs that are being used at rallies, for example, has gone up from 2009. The age of the street corner rallies is over.”

The quality of messaging has gone up too. An Indian Express report says in 2009 political parties spent around $83 million on advertising campaigns. In 2014, the figure will be at least around $300 million, partly owing to a spurt in digital marketing through which politicians are hoping to connect to a younger generation.

The incumbent Congress party “has started spending on digital, which it never did in 2009,” says Mahesh Murthy, founder of the digital marketing group Pinstorm, which works for some of the leading political parties.

Upgraded voter mobilization and logistics — including the hire of helicopters and jets for star campaigners like Narendra Modi or Rahul Gandhi — are also eating up a ton of cash. Span Air, a private chartered flight company, has leased all five of its aircraft to the Congress party until the end of the elections. The hourly cost of these planes range between $1,250 and $3,000. Even a very conservative estimate—five aircrafts for 15 days at an average cost of $1,500 per hour for 8 hours a day—totals to a whopping $900,000.

Some argue that these sums simply reflect the cost of campaigning in a country the size of India. “I don’t think $5 billion for 800 million people is expensive,” says Mohan Guruswamy, a Delhi-based political observer. “Democracy doesn’t come cheap.”

Correction: The original version of this story misstated the amount the Congress party is spending per day on chartered planes. 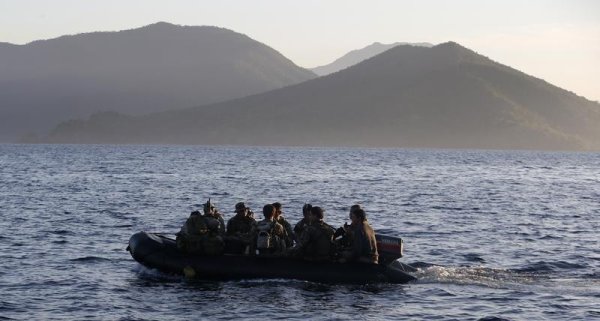 The Vietnamese and Filipinos Throw a Beach Party, but China Isn't Invited
Next Up: Editor's Pick