Republicans may have found an answer to the Democratic “War on Women” battle cry in the most unexpected place: The women’s health section of your local pharmacy.

GOP candidates across the country are calling for birth control pills to be available over-the-counter without a prescription, elevating a once obscure conservative proposal to reduce women’s dependence on health insurance programs. Four GOP Senate candidates have advocated for over-the-counter birth control, Colorado’s Cory Gardner, Thom Tillis in North Carolina, Ed Gillespie in Virginia, and Mike McFadden in Minnesota. “I actually agree with the American Medical Association that we should make contraception more widely available. I think over-the-counter oral contraception should be available without prescription,” Tillis said last week in his first debate against Sen. Kay Hagan.

Liberal groups, not wanting the GOP storyline to take hold, have come back swinging, accusing Republicans of engaging in a deception to fool women. On Monday, Democratic groups in Colorado launched a five-figure television ad campaign to push back on Gardner’s embrace in a television ad last week of the policy proposal, arguing that the plan could raise out-of-pocket costs for women, since insurers who now provide no-cost contraception tend not to cover over-the-counter medication.

The controversy has put Democratic candidates in the odd position of seemingly opposing a policy proposal that voters are inclined to believe they support: the availability of birth control without a doctor’s prescription. From Colorado to North Carolina, Democrats have rejected the proposal as a distraction, contending that it amounts to a clever way of undermining the new benefits provided under Obamacare.

A spokesperson for Democrat Kay Hagan of North Carolina did not respond to a request to clarify whether she would support the over-the-counter proposal, while a spokesman for Mark Udall of Colorado and official with Planned Parenthood Action Fund said they would only consider the issue as long as it is coupled with maintaining insurance mandate. In Colorado, MoveOn and NARAL Pro-Choice America released a five-figure television buy against Gardner on the issue Monday.

Democrats and Republicans trace the political origins of the proposal, which has been pushed by doctors since at least 2012, to Louisiana Gov. Bobby Jindal. In a December 2012 Wall Street Journal op-ed, the 2016 presidential hopeful and former Assistant Secretary of Health and Human Services argued that contraceptives should be made available over the counter to increase access and bring down costs. “As an unapologetic pro-life Republican, I also believe that every adult (18 years old and over) who wants contraception should be able to purchase it,” Jindal wrote, calling for “the end of birth-control politics.”

Because it would be sold over the counter, Jindal argued that prices would be lower because of additional competition, while removing a doctor from the equation would make it easier for women to access it.

It was a shrewd policy proposal designed to provide Republican candidates a safety zone on the thorny subject of contraception. Most Republican candidates have objected to the contraception mandate in the Affordable Care Act which requires most employers’ health insurance to cover birth control despite their religious beliefs. Republicans generally celebrated the Supreme Court ruling in June in the Hobby Lobby case that closely-held companies with religious objects could abstain from covering contraceptives.

Jindal’s political aides, and many GOP operatives, believe birth control is a gateway issue for women voters. While the politics of abortion have remained consistently split, Republicans fear being cast as anti-birth control could cost them a generation of women voters. “It’s often an immediate shutdown,” said one Jindal aide.

But the simple proposal is hardly comprehensive, and is a long way from going into effect anyway. No birth control manufacturer has applied for an over-the-counter designation from the Food and Drug Administration, and only the contraceptive pill would be covered. If private plans didn’t cover other forms of birth control, like IUDs, patients who use them would be forced to spend more out of pocket.

“If Cory Gardner and others were serious about expanding access to birth control, they wouldn’t be trying to repeal the no-copay birth control benefit, reduce Title X funding for birth control, or cut women off from Planned Parenthood’s preventive health services,” said Dawn Laguens the executive vice president of Planned Parenthood Action Fund in a statement. “This is simply a cynical political attempt to whitewash his terrible record and agenda for women’s health. The reality is that Cory Gardner’s proposal would actually cost women more by forcing them to pay out of pocket for the birth control that they are getting now at no cost thanks to the ACA.”

But other Democrats see the GOP strategy as playing right into their hand, with Republicans implicitly acknowledging that women have reason to be skeptical of their agenda. As another Democratic operative put it, “The more time that we spend talking about birth control, we’re winning.” 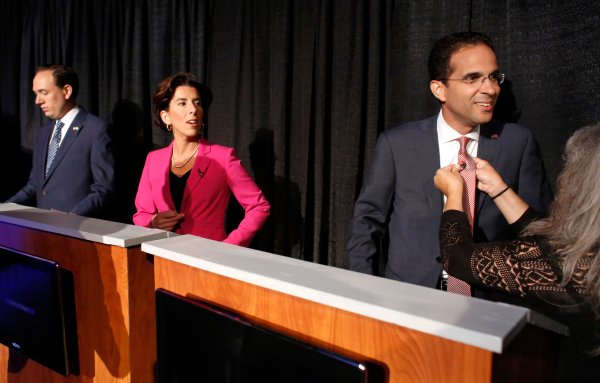