The video is grisly. It shows corpses crucified on makeshift crosses, and dead bodies being chucked into a ravine. Mosques explode. Masked assailants lash writhing victims and execute kneeling prisoners. A quartet of severed heads line a ledge, surrounding a decapitated body.

Titled “Welcome to the ‘Islamic State’ Land,” the film features grainy footage that looks plucked from the dark recesses of the Internet. Its tone is flecked with snark. “Travel is inexpensive,” a caption declares, “because you won’t need a return ticket!” But the low-budget aspect is by design. The video, first published on YouTube in late July, is a production of the U.S. State Department, which is ramping up its efforts to neutralize the Islamic State of Iraq and Greater Syria (ISIS)’s success at recruiting over social media. The campaign includes a State Department-branded YouTube channel, which hosts videos that accuse the terrorist group of hypocrisy and war crimes against fellow Muslims. It includes a Twitter account, Think Again Turn Away, that links to stories about women and children harmed by the group. And it has a Facebook page dotted with gruesome images of bloodied civilians.

This digital battlefield has become a vital theater in the war on terrorism, and for the U.S. government, the front lines are the digital outreach team in a small State Department office, the Center for Strategic Counterterrorism Communications (CSCC), which began operation in 2011 on orders from President Obama. With a budget of only $6 million, and about two-dozen staffers, the group is spearheading the campaign to combat the sophisticated propaganda ISIS is spreading on social media and Internet bulletin boards. Working in Arabic, Urdu, Somali and now English, its analysts comb the Internet for radical material, wading into everything from Twitter to Yemeni tribal forums to counter and rebut jihadist claims.

What these State Department staffers are looking for is an opportunity to “engage in our very particular brand of adversarial engagement,” says Alberto Fernandez, a former ambassador to Equatorial Guinea who serves as coordinator of the CSCC. (The center reports to the Under Secretary of State for Public Diplomacy and Public Affairs, Richard Stengel, who is a former managing editor of TIME.) Staff try to cast extremist activity in a negative light, tamping down the lure of jihad for ordinary people whose political grievances might draw them toward to groups like ISIS. Sometimes this entails direct confrontation, but such confrontations are not the group’s goal.

“Our target audience is not the extremists,” Fernandez says. “It’s the people the extremists are talking to, trying to influence. It’s people who have not yet become terrorists.”

The program reflects a recognition within the U.S. government that online propaganda is not only a potent way to promote terrorism, but also a necessary tool in preventing it. “There is a connection between what happens in the virtual space and what happens on the ground,” says Fernandez. “You can’t divorce one from the other.”

Which is why the U.S. is fighting to regain territory it has long ceded to extremists. Jihadists were early to grasp the power of technology to promote their cause, dating back to the grainy eight-track tapes that inspired foreign fighters to help roust the Soviets from Afghanistan. Osama bin Laden used direct-to-camera proclamations, distributed by Al-Jazeera, to incite followers. “More than half of this battle is taking place in the battlefield of the media,” his top deputy, Ayman al-Zawahiri, wrote in 2005 to Abu Musab al-Zarqawi, then the head of Al-Qaeda in Iraq (AQI).

AQI was “the first group to do Internet outreach very effectively,” says Clint Watts, a senior fellow at the Foreign Policy Research Institute and counterterrorism expert. Instead of austere sermonizing, Watts says, it used battlefield footage—IED explosions, gun battles with U.S. soldiers—to glamorize jihad. ISIS sprang from that group’s ashes, aping its strategy in the process. It even adopted AQI’s most macabre tactic. A decade before the American journalists James Foley and Steven Sotloff were murdered by a masked ISIS fighter, AQI militants, thought to be led by Zarqawi, beheaded the American contractor Nicholas Berg in a tape that presaged last month’s gruesome videos.

ISIS has refined social-media propaganda to a new level, emerging with “the most sophisticated propaganda machine of any extremist group,” said Matthew Olson, director of the National Counterterrorism Center, who spoke about the threat at the Brookings Institution earlier this month. Its rise corresponds with the migration of digital jihadi activity from password-protected forums to open social platforms, which have low barriers to entry.

ISIS has a smartphone app, called the Dawn of Glad Tidings, and a propaganda arm, the Al-Hayat Media Center, that distributes videos glorifying jihad. The group’s media campaign is a mix of battlefield footage and lifestyle snapshots: jihadis cavorting in luxury buildings, lounging in restaurants or patrolling city streets. Amid the carnage, its fighters also tweet cat pictures and announce their penchant for Western products like Snickers and Nutella.”They’re as sophisticated as anybody out there in how they frame and how they use modern technology,” Defense Secretary Chuck Hagel told CNN.

Much of the terrorist group’s work has taken place on Twitter. “2013 was the year of Twitter for Al-Qaeda and ISIS,” Fernandez says. Since May, more than 60,000 Twitter accounts have been set up to herald the group, including 27,000 since the murder of Foley last month, according to an analysis conducted by Recorded Future, a web analytics firm, for the British media outlet Sky News. ISIS has used the platform both to spread grotesque photos of decapitated heads and bloodied bodies—”jihad porn,” as government officials call it—and to recruit potential conscripts. As Twitter cracked down on some of the gory imagery, an ISIS adherent even called for the murder of the site’s employees.

In the meantime, many of the group’s members have fled the site, terrorism analysts say, for more obscure social-media platforms like Friendica, Diaspora and VK (a Russian social-networking site used by the Boston bombers). The U.S. still finds itself outmatched as it tries to suss out and rebut all this activity. “There is a Mount Everest of radicalizing material” on the Internet, says Fernandez. “There’s a small hill, a hillock, of counter-radicalizing material.”

It is CSCC’s job to push this counter-narrative to people before they are converted into extremists. The expansion of this effort to include English-language sites last year is a reflection of a growing threat. ISIS is filling out the ranks of its army by recruiting disaffected Muslims from around the world, including the West. It has lured more than 100 Americans to fight in its ranks, according to Texas Republican Michael McCaul, the chairman of the House Committee on Homeland Security. One of them, a 33-year-old native Minnesotan named Douglas MacAuthur McCain, was killed in a battle in Syria last month, the first known American to die while fighting for ISIS. The FBI has arrested more than a half-dozen Americans en route to Syria to enlist in jihad.

But much of the digital outreach takes place in languages other than English. CSCC has 15 fluent Arabic speakers, four working in Urdu, two in Somali and just two exclusively in English. In Arabic, “the CSCC brand is pretty well established,” Fernandez says. In 2012, the Global Islamic Media Front, an Al-Qaeda propaganda outlet, warned participants in jihadist forums to be wary of CSCC’s outreach. The following year, a prominent jihadi created a knockoff State Department account and coordinated an effort to drown the U.S. effort with spam. Such interactions are “proof that we are annoying them, getting into their heads all the time,” Fernandez says.

These are small markers of success for a modest campaign whose overall influence is hard to gauge. It’s virtually impossible to prove that a potential jihadist was deterred from joining because of the U.S. messaging campaign. And as messenger, the U.S. government has obvious weaknesses. ISIS adherents have ignored the coterie of high-ranking clerics inveighing against the group’s treatment of fellow Muslims; it’s hard to imagine them listening to a U.S. government mouthpiece. “It is good that the State Department recognizes the importance of social media in jihadi recruitment,” says Rita Katz, the director of the SITE Intelligence Group, which tracks global terrorism. “However, as the State Department’s ‘Think Again Turn Away’ Twitter account often engages in useless arguments with jihadists fighters and supporters, their efforts are not only ineffective, but also provide jihadist with a megaphone to voice their arguments.”

Fernandez acknowledges that it is difficult to calculate the impact of his cyber-warriors. “You can’t prove a negative,” he notes. But he says the frustration of its enemies is one way to measure the effort. Last week, when a prominent Yemeni journalist fired off a series of tweets critical of Al-Qaeda, the terrorist group responded with a hashtag campaign that branded him a follower of CSCC. “They want to discredit him by linking him to us,” says Fernandez. “That’s a pretty strong recommendation.” 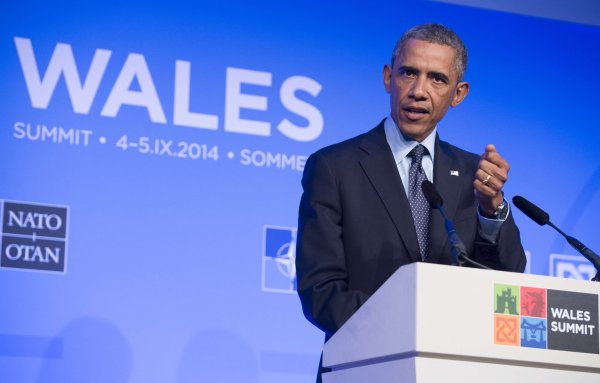 Obama Vows to ‘Degrade and Destroy’ ISIS
Next Up: Editor's Pick