For the first time, researchers report that treating early signs of autism in infants as young as 6 months can essentially help them to avoid developmental delays typical of the disorder. And the intervention doesn’t involve pills or invasive surgery but an intensive behavioral therapy provided by the babies’ parents, according to the Journal of Autism and Developmental Disorders.

Kristin Hinson was one of those parents. She knew what autism looked like. With two of her three children showing developmental delays, she was on the lookout for similar signals when her son Noah was born. And at 6 months, they came. Noah began avoiding eye contact with her and other family members, his muscle tone was low, and he started lagging in the early infant milestones like rolling over and responding to sounds and people. “He was doing everything, but everything was a little sloppy,” says Hinson.

Because she had two children affected by autism, Noah was enrolled in a study of infant siblings of autistic children at the University of California Davis. Noah’s symptoms appeared relatively early — at that age, doctors can’t diagnose the developmental disorder, but they know the hallmarks that are strongly associated with it. Noah’s sibling history also meant there was a good chance he would eventually show delays in language and social skills as well.

MORE: Brain Imaging Could Detect Autism Risk in Infants as Young as 6 Months

He was fortunate enough, however, to be one of seven children to begin an intensive, parent-based program for treating autism in infants as young as 6 months. The goal of the program is to slow or avoid the symptoms of autism that often mean affected children need special education or other formal care as they get older.

Hinson attended 12 sessions for an hour once a week at the Institute, and continued to apply what she had learned there during each of her interactions with Noah at home for six weeks while following up with their counselor. The techniques she and the other parents learned were based on the Early Start Denver Model, which was developed by Sally Rogers, a professor of psychiatry at UC Davis, and Dr. Geraldine Dawson at Duke University.

The program involved intensive and intentional play by trained therapists at children’s homes. Once a week, the therapists went to the families’ homes and purposefully engaged with the toddlers, who were between three years and five years old. Even when they were rebuffed, the therapists would persist, finding objects that appealed to the children and inserting themselves into the child’s play with that object so they were forced to have more social engagement. Eventually, the children responded, and even showed brain changes that suggested their brain patterns were normalizing to look more like those of children unaffected by autism.

With the latest group, Rogers moved the program earlier, to babies between 6 months and 15 months old, well before autism is usually diagnosed. Because the babies were so young, Rogers wanted to test whether parents could be taught the same techniques that therapists used, so the strategy could be applied more consistently and frequently than a few times a week, and during daily interactions with the infants—while they were fed, diapered, bathed and more.

The results were astounding. Six of the seven infants in the study essentially caught up in their learning and language skills by age two or three. They no longer showed developmental delays in social communication or language, and behaved just as a control group of children unaffected by the disorder.

“At 18 months, Noah just blossomed,” says Hinson. “He started talking, and really socializing. Before, he wasn’t really engaging with others, and all of a sudden it felt like a light flipped on.”

Noah is attending a mainstream preschool, and Hinson doesn’t anticipate he will need any special education or tutoring to keep up with his classmates once he enters kindergarten,

Doctors, especially psychiatrists, don’t like to use the word “cure.” But, says Rogers of the small, promising group of infants like Noah who were part of the study, “We are curing their developmental delays.”

She’s careful not to suggest that the behavioral therapy can cure children of autism, since the only a handful of babies were involved, and they haven’t been studied long-term yet. But the findings do support the idea that intervening early, and with intensive therapy, can make a difference in the trajectory of the disorder.

The results also suggest that the progression of autism isn’t inevitable, and that its symptoms aren’t entirely biologically or genetically preordained. “If a baby doesn’t smile at you, doesn’t make eye contact, doesn’t respond pleasurably to your many interactions or doesn’t ever call for your attention, you don’t know if you’re on the right track,” she says of the typical early signs of autism. “If the message you get from them is that they aren’t interested, then you’re not going to continue.” Over, time, she says, that limits the number of social learning opportunities that the babies have, and they may spiral deeper and deeper into their own world. “Over time, the parents and children accommodate the child’s interest in objects and lack of interest in people.”

The behavioral training that she provides parents counters this cycle, and forces parents to find ways to engage their child, even if it means using the inanimate objects that appeal to them. If an infant is captivated by a stuffed animal, for example, then parents are trained to enter their baby’s field of vision, and play with the animal by using it to tickle the child, or tickle himself. The parent might even hide the stuffed toy under her shirt, and encourage the baby to find it. “The parent takes over so the child is now interested in the parent because there is a game going on with the toy and the parent,” says Rogers. “The key is to create a social game so the object is now serving the people instead of taking over the child’s attention.”

That shift takes effort, however, and it isn’t easy. “The first month I felt really frustrated,” admits Hinson. “There was a lot of pressure on me.” She says that it took most of the 12 week program before she felt completely comfortable with the new way of interacting with Noah, with inserting herself into his “circle” of attention at every opportunity, and with waiting for him to respond to her forays at communication.

But, she says, it was well worth the effort, and it comes easily. “Every new skill, like teaching him nursery rhymes and songs, or trying to get him to share something, and show me something, didn’t come natural to me at first. But when he started giving me some reciprocation, like smiling and babbling, it was like I was getting rewarded for the hard work.”

The skills are “completely doable,” says Hinson, and far less intrusive than having therapists visit the home once a week, which she did for her two older children who were developmentally delayed. “It’s brilliant if you can get the hands-on training. Because as parents, we are in their circle all the time, every day of their lives, and what better way to help them than to do it every day at every opportunity.”

While she’ll never know if the program was actually responsible for helping Noah to avoid developmental delays, Hinson is sure of one thing. “If they could have had something like this for my other children, I think they would be completely different children today.” 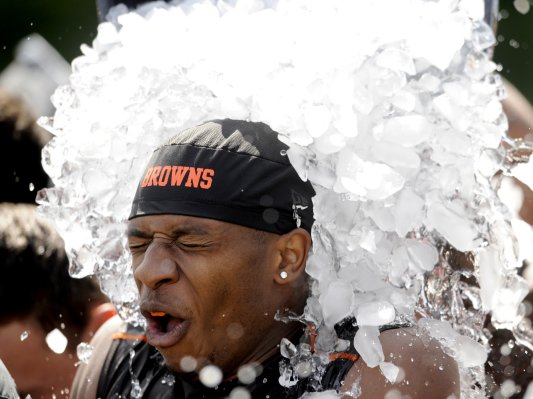 ALS Ice Bucket Challenge Raises $8.6M in One Day
Next Up: Editor's Pick