Outside linebacker Malcolm Smith #53 of the Seattle Seahawks celebrates his 69-yard touchdown with teammates after intercepting a pass thrown by quarterback Peyton Manning #18 of the Denver Broncos intended for running back Knowshon Moreno #27 in the second quarter during Super Bowl XLVIII at MetLife Stadium on Feb. 2, 2014 in East Rutherford, N.J.
Jeff Gross / Getty Images
By Sean Gregory

No cold weather shut down the Super Bowl. Seattle’s defense handled that.

The Seattle Seahawks won their first Super Bowl in franchise history, romping the Denver Broncos, 43-8, on a cool, pleasant evening at MetLife Stadium, the first-ever outdoor Super Bowl in a cold-weather city. Seattle’s “Legion of Boom” secondary, plus the linebackers and defensive linemen, completely dominated Denver’s historically prolific offense. Peyton Manning’s evening was a disaster. Sure, he set a Super Bowl record for completions, with 34 (on 49 attempts). He threw for 280 yards, and most of them felt empty. He threw two interceptions, and a single touchdown. He fumbled. A snap sailed by his ear.

All playoffs long, Manning’s offensive line protected him from pressure. But tonight, Seattle’s pass rush got to him all night. The Seahawks tipped passes. They crushed wide receivers coming across the middle. Richard Sherman blanketed Demaryius Thomas; that guy backs up his big words. Seattle’s quick, explosive safeties eliminated the deep threat. Thanks to this stunning performance, Seattle’s defense is firmly in the “greatest-ever” conversation.

Denver played dumb. For Manning and the Broncos, the nightmare started on the opening play; center Manny Ramirez snapped the ball while Manning approached the line of scrimmage. It sailed by Manning’s head and into the end zone; running back Knowshon Moreno fell on it, resulting in a safety for Seattle. The Seahawks kicked a field goal on their next possession, to give them a quick 5-0 lead. (No, this wasn’t a baseball game).

On Denver’s final possession of the first quarter, Julius Thomas cut to his left, but Manning’s pass didn’t follow him. He threw it straight — into the hands of Seattle’s Kam Chancellor. The Broncos finished the first quarter with 1o yards of total offense, and trailing 8-0.

Seattle started the second quarter with its first touchdown, a one-yard Marshawn Lynch run, to put the Seahawks up 15-0. A silly pass interference penalty by Denver’s Tony Carter, on a third-and-four play from Denver’s 5-yard-line, was the decisive play of that drive. Manning threw his second interception during the second quarter. Seattle’s Cliff Avril hit Manning on a third-and-13 pass attempt; the ball floated like a hunted duck, and fell into the hands of Malcolm Smith, who ran it back the left sideline for a 69-yard touchdown return, giving Seattle a commanding 22-0 lead.

Denver desperately tried to put points on the board before Bruno Mars’ halftime show, but a false start penalty on a key third-and-four, from Seattle’s 21-yard-line, stalled the drive’s momentum. Against Seattle, every yard lost is incredibly damaging. The Broncos went for it on fourth-and-2. Another Manning pass was tipped, prolonging his torture into the extended halftime.

An oh, the pain continued in the second half. On the opening kickoff, Seattle’s Percy Harvin scored on a 87-yard return, giving Seattle a 29-0 lead. Strangely, the Broncos ran on a third-and-10 during the next possession, as if Manning was afraid to throw the ball, and challenge Seattle’s secondary. Maybe he had a hunch. Later in the third quarter, Manning connected with Demaryius Thomas on a 23-yard yard completion, but Seattle’s Byron Maxwell punched the ball out of his hands, creating yet another Denver turnover. Seattle made it 36-0 when receiver Jermaine Kearse broke a tackle and walked into the end zone on a 23-yard pass play. Manning finally connected with Demaryius Thomas for a 5-yard touchdown pass at the end of the third quarter. But it was already garbage time. The game was over.

Football fans have been spoiled; the previous seven Super Bowls have been tight games. We were due for a snore.

Though Seattle’s defense won the Super Bowl — and second-year QB Russell Wilson had whale of a day, going 18-25 for 206 yards, two touchdown passes and zero interceptions — the attention will now inevitably turn to Manning’s future. Manning is 37, and still chasing that second Super Bowl title; he’s now 1-2 in title games. Little brother Eli has a couple of rings, which has to gnaw at him. Manning is coming off a historic season, in which he set the NFL record for passing yards and touchdown passes. It’s hard to imagine him retiring after this game. What a lousy way to go out. 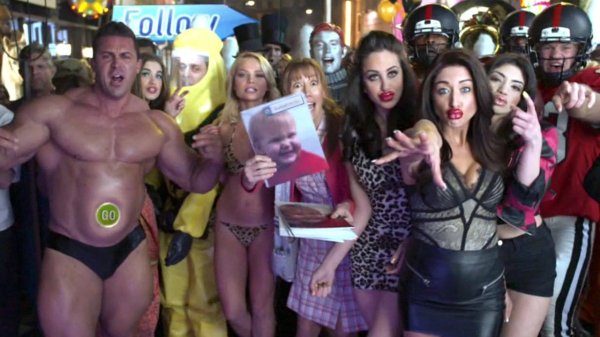 The Best and Worst Super Bowl Commercials of 2014
Next Up: Editor's Pick