Things have been getting worse and worse for Mark Driscoll in recent weeks. But what I want to point out for a moment is one of Driscoll’s posts from 2001, when he was posting to a church message board under the name William Wallace II. I have rarely seen an evangelical man assert male superiority and prominence this directly.

Notice that all women are portrayed as another man’s penis home, whether or not they are married. This squares with what I was taught—every woman is some man’s future wife, and that man owns her body even before they meet.

Oh yes, a man should keep “his home” sexually satisfied. And the wife, for her part, should be sexually arousing to her husband and “rejoice” when he has an erection. This sad attempt at mutuality fails when the one party is described as a penis home.

You can view the full screenshot here.

Frankly, I’m not surprised that this is the viewpoint taken by at least some evangelical men. All to many evangelical and fundamentalist advice books treat the man as the primary creation and the woman as, well, merely his helper. The man is primary, the woman is secondary. The man was created for God’s glory, the woman for man. These individuals claim that men and women are nevertheless equal before God, but that claim rings hollow when placed alongside the rest of their rhetoric.

The claim that women are uplifted and honored as caregivers and nurturers in the home also rings hollow in this context. In Driscoll’s treatment, women are no more than penis homes. Women were created to satisfy men. There is nothing uplifting or honored in that. Even many evangelical and fundamentalist women, who are attracted to those beliefs in part because of the rhetorical value they place on homemaking, must surely be appalled by Driscoll’s rhetoric.

In a sense, Driscoll’s downfall was only a matter of time. 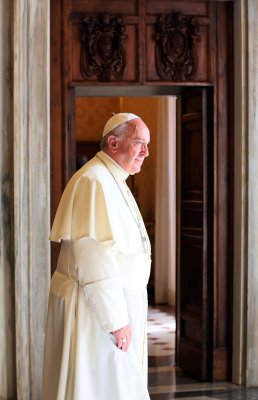 Is the Catholic Church ‘Evolving’ on Gay Marriage?
Next Up: Editor's Pick