Baltimore Ravens running back Ray Rice sits on the sideline in the first half of an NFL preseason football game against the San Francisco 49ers on Aug. 7, 2014, in Baltimore.
Nick Wass—AP
By Eliana Dockterman

The Baltimore Ravens terminated Ray Rice’s contract on Monday afternoon, the team announced on Twitter. An NFL spokesman tweeted shortly thereafter that the league had decided to indefinitely suspend Rice. The decision came after TMZ sports released a video Monday morning of the Ravens running back hitting his then-fiancée, now-wife Janay Palmer in February.

The incident first came to light in February when TMZ Sports published video footage from a security camera showing Rice dragging an unconscious Palmer out of the elevator at an Atlantic City hotel. Rice was charged with felony aggravated assault, but participated in a pretrial diversion program that meant he could avoid jail time.

The NFL came under fire for handing down what many argued was a light two-game suspension to Rice in July. NFL commissioner Roger Goodell later admitted in August that the league “didn’t get it right,” and beefed up the league’s domestic violence policy for future incidents. He also wrote a long letter addressed to all the teams’ owners outlining a six-game suspension without pay for the first offenses and a lifetime ban for second offenses for any NFL personnel involved in domestic violence.

In a press conference Monday, Ravens coach John Harbaugh explained that the team watched the full video of the assault for the first time, along with the rest of the public Monday. He said the video “changed things of course. It made things a little bit different.”

Harbaugh came under fire once again for not exacting a stiffer punishment on Rice earlier but the coach declined repeatedly to address questions about why it took a video of the full assault being made public for Rice to be suspended indefinitely. Harbaugh earlier defended Rice as “a heck of a guy,” and said Monday he stands by those comments. “There’s nothing but hope and good will for Ray,” he said. Harbaugh also said the decision to suspend Rice “won’t impact our game.”

The new video apparently shows what took place before Rice dragged Palmer out of the elevator. In the graphic footage, Rice punches Palmer with his left hand, knocking her off her feet and onto the elevator floor. The NFL claims that it never saw the new video until today, according to TMZ.

Reactions to the new video came swiftly on Monday. White House press secretary Josh Earnest applauded the decision in a Monday afternoon briefing: “We certainly welcome any strong signals by anyone in this country” against violence against women.

Ruth Glenn, the executive director of the National Coalition Against Domestic Violence, told TIME, “I think the video shows what those of us who have worked in this movement have known for a very long-time. What you’re seeing in this video happens daily to someone in the United States. Unfortunately we are now eye witness to a very awful assault.” She added, “I feel bad for the now-Mrs. Rice for what she endured in those moments.”

Rice publicly apologized twice for the incident—first to the public and then to his wife. “I failed miserably,” Rice said. “But I wouldn’t call myself a failure cause I’m working myself back up.” The two have since married.

The Ravens initially came to Rice’s defense after the incident. Harbaugh said after the first video was released: “The two people obviously have a couple issues that they have to work through, and they’re both committed to doing that…They’re getting a lot of counseling and those kinds of things, so I think that’s really positive. That was the main takeaway.”

But as more details—and the new video—have emerged, the team decided it was time to cut ties.

Glenn believes the team and the league are taking the right steps in changing their policies. “I think they have been proactive at addressing the issues of domestic violence and sexual assault,” she said.

Correction: The original version of this story misstated the name of the Ravens coach. 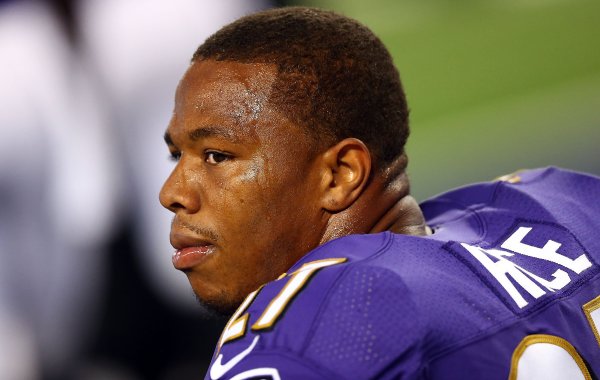 Video of Ray Rice Punching Wife Is Released
Next Up: Editor's Pick