The NFL's Epic Breach of Trust

Ray Rice of the Baltimore Ravens sits on the bench against the Dallas Cowboys in the first half of their preseason game at AT&T Stadium on August 16, 2014 in Arlington, Texas.
Ronald Martinez—Getty Images
By Sean Gregory

The NFL is drowning in disgrace. The league has faced heavy criticism on any number of issues over the past few years, but the bungling of the Ray Rice domestic violence incident, by both commissioner Roger Goodell and the Baltimore Ravens, is a new NFL low. Right now the actual games, given all these off-field antics, seem pretty beside the point.

Sure, the Ravens cut Rice, and Goodell suspended him indefinitely. But only when they had no other choice. After a new video surfaced Monday on TMZ.com — showing Rice clocking his then-fiancee out cold in an Atlantic City elevator — there was no conceivable circumstance in which Rice could take the field after his laughable two-game suspension was up. It’s hard enough to expunge Rice’s punch from your mind. His return would serve as an awful reminder, every time he touched the ball, of his now very public crime.

The NFL patted itself on the back in late July, when V.P. of labor policy Adolpho Birch tried to justify the two-game penalty to ESPN Radio’s Mike Greenberg and Mike Golic. “The discipline that was taken by the NFL is the only discipline that occurred with respect to Mr. Rice in this case,” Birch said. “Were he not an NFL player, I don’t know that he would have received punishment from any other source.” Since the courts only gave Rice a slap on the wrist — Rice was charged with a felony, but was able to enter a pretrial diversion program to avoid jail time — the NFL actually thought it was playing tough guy. Roger Goodell also said that he was “impressed” with Rice’s contrition.

“The way the NFL has responded is alarming,” says Seton Hall University law professor Jessica Miles, who specializes in domestic violence law. “Anyone who knows anything about domestic violence would not be surprised that the prosecution did not pursue the case. As an advocate of victim’s rights, I’m disappointed that it appears that the abuser got away with it. But I understand where the prosecutor is coming from.” If the victim does not press the case – Janay Palmer married Rice a day after his indictment — prosecutors must keep her right to autonomy in mind, says Miles. Also, losing such a trial could have devastating effect. “Abusive men could feel empowered ,” says Miles. “It could really hurt future victims.” With the video evidence, it doesn’t appear that Rice has much of a legal defense. “But as we all know, jury verdicts can sometimes surprise,” says Miles.

Rice’s contrition shouldn’t count for much either. “The very first thing abusers do is apologize,” says Miles. “It’s very, very typical. The NFL showed zero understanding of domestic violence. It’s like they didn’t even Google it.”

A few weeks ago, Goodell himself did admit that Rice’s two-game penalty was a mistake. It was especially embarrassing given that Cleveland’s Josh Gordon was suspended a year for smoking marijuana, which is legal in two states. Goodell created harsher punishments for future NFL offenders. So now, we play a game of who knew what, and when? The NFL says that it never saw the tape of Rice’s punch before today. But at least one respected NFL reporter says otherwise.

In July, SI’s Peter King wrote that the NFL had seen the tape, but on Monday clarified his claim to this: he trusted a source who assumed the NFL had viewed it. King’s admitted “lapse in reporting” aside, if the NFL hadn’t in fact seen the tape, why wouldn’t the League immediately refute the writing of one of the most widely-read NFL journalists in the country? If the NFL hadn’t seen any other video evidence except the tape released in February, just say so when Rice was first punished. Everyone knew the elevator tape was out there — casinos do tend to have them. Simple transparency always helps.

And no need to applaud the Ravens for finally cutting Rice: the team has been tone-deaf and foolish. Even if the team did not in fact see the new video before it went public, the Ravens and NFL officials knew the full well that the elevator scene was ugly. In May, the team hosted an ill-advised press conference with Rice and his wife in which Janay apologized for her “role in that night.” The Ravens conveniently tweeted that out.

After Rice’s two-game suspension, a Ravens PR official wrote a piece, posted on the official team website, explaining his fondness for Rice. At the start of training camp, Ravens coach John Harbaugh called Rice a “heck of a guy” and held up Rice’s penalty as a moral lesson for children. “He makes a mistake, alright,” Harbaugh said. “He’s gonna have to pay a consequence. It’s good for kids to understand that it works that way, and that’s how it works. That’s how it should be.”

People can backtrack all they want. The League’s popularity and profits can keep ballooning. But the Rice case drives something home: Don’t go trusting the NFL. 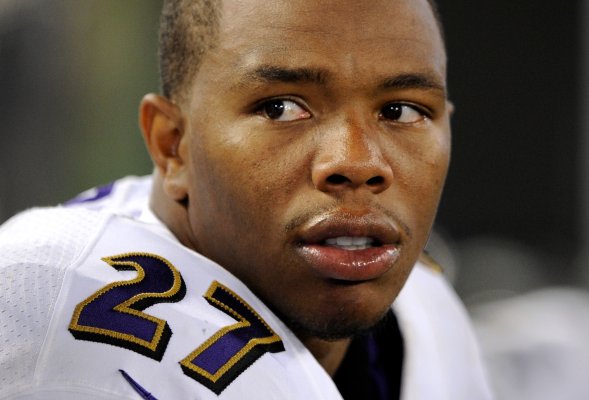