Dr. Seuss fans will have a chance to read four of the famed cartoonist’s long-forgotten stories in a new volume, Horton and the Kwuggerbug and More Lost Stories, out today. The book features beloved characters as Seuss (whose real name is Theodor Geisel) rendered them for Redbook magazine in the 1950s. Though Seuss died in 1991, a collector and biographer, Charles Cohen, helped catalyze the new Horton after finding archival material in the magazine.

Marco in an illustration from Horton and the Kwuggerbug and More Lost Stories by Dr. Seuss
Courtesy of Random House

In “Marco Comes Late,” Marco, from his first children’s book And to Think That I Saw It on Mulberry Street, makes up a fantastical story to explain why he was really late to school.

In “Horton and the Kwuggerbug,” a demanding insect called a Kwuggerbug sends Horton, the elephant best known for hearing a Who, on a wild mission that involves climbing mountains and standing up to crocodiles to find Beezlenuts—a delicious, sought-after dessert.

The Grinch is still as grouchy as ever and preaches about the pitfalls of consumerism in “The Hoobub and the Grinch,” reflecting the author’s “feelings about his history in advertising,” according to the book’s introduction written by Charles D. Cohen, a dentist who collects Dr. Seuss memorabilia.

Officer Pat in an illustration from Horton and the Kwuggerbug and More Lost Stories by Dr. Seuss
Courtesy of Random House

And the extremely paranoid policeman Officer Pat from “How Officer Pat Saved the Whole Town” was meant to be a book unto himself, but Random House opted to publish Yertle the Turtle and Other Stories instead.

The original illustrations live in the archives of the Dr. Seuss Collection at the University of California at San Diego. 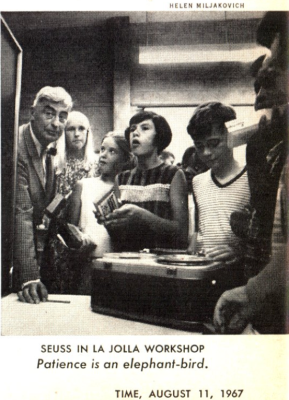 5 Things You Might Not Know About Dr. Seuss
Next Up: Editor's Pick