Valerie Trierweiler in the gardens at the Elysee presidential palace in Paris in 2013.
Thomas Samson—AFP/Getty Images
By Vivienne Walt / Paris

Revenge is a dish best served cold, as the saying goes, meaning that it takes a cool, level head to deliver just the right sucker punch. That might be the most telling lesson from the scandal that has erupted this past week in France, over the former First Lady Valérie Trierweiler’s explosive tell-all book about her life with President François Hollande. “Thank You For This Moment” appeared in bookstores last Wednesday, with no forewarning to French officials, and its initial print-run of 200,000 sold out within days, inspiring countless front-page articles about the apparently callous behavior of a never-married president towards the women in his life. Yet there has been equally harsh criticism of Trierweiler, whose stinging words have sounded to many like petty whining, at least when compared with the severe economic crisis Hollande is struggling to fix.

To recap (if readers need reminding): Hollande’s domestic life imploded in spectacular fashion last January when the French gossip magazine Closer published photographs of him sneaking out of the sumptuous Napoleonic palace on his motorbike, to spend the night with his alleged lover, the French actress Julie Gayet. Three weeks later (hours after TIME interviewed Hollande inside the Elysée) Hollande declared his seven-year relationship with Trierweiler over, in a bland 18-word written statement. While the world lapped up the details, inside the palace, the couple spiraled into a private hell that threatened Trierweiler’s physical wellbeing, according to the former First Lady. Trierweiler, 49, describes the president frantically trying to prevent her from swallowing a fistful of sleeping pills the morning the news broke. “I swallow what I can. I want to sleep. I don’t want to live through the coming hours,” Trierweiler recounted to Paris Match magazine, where she has been a longtime staff writer; her book was splashed on the magazine’s cover last week. “I want to escape. I lose consciousness.” Trierweiler then spent a week in the hospital, with officials claiming at the time that she was suffering the effects of extreme stress.

Bad as that account is, other parts of Trierweiler’s book that take aim at Hollande’s battered political standing could be even more damaging for the French leader. Trierweiler casts herself as a working-class woman at sea within the cocooned political elite into which she was thrust—and with no empathy from Hollande. She claims the Socialist leader, who won power in 2012 by casting the then-President Nicolas Sarkozy as representing only the rich, was “bored to tears” when dining with her family in their low-income home, preferring, she says, to visit the Gayets’ grand chateau in southwestern France. “He campaigned as the enemy of the rich but the truth is that he despises the poor,” Trierweiler writes, saying that Hollande mocked the poor as “sans-dents” or toothless, referring to the cost of dental treatment.

The claims have put Hollande under withering scrutiny, even from reliably friendly sources. “Who are you François Hollande?” asked the weekend front page of the left-leaning Liberation newspaper, which supports the ruling Socialist Party. Inside, its editorial says that the president, most often vilified for being soft-edged and ineffectual, emerges in Trierweiler’s book as hard and cynical, adding, “The marshmallow president becomes the flint president.”

The new image will not likely help Hollande, who has overseen a worsening economy and rising unemployment. On Sunday the polling agency IFOP released a survey taken on Friday and Saturday (after Trierweiler’s book came out) showing that 65% of Socialist Party voters did not want Hollande to run for reelection in 2017. A separate poll on Friday by TNS-Sofres showed that Hollande’s popularity ratings had sunk to 13%, the lowest of any French president in about 70 years. And although only five percent of those IFOP surveyed named Hollande’s rocky private life as their top criticism of him, some believe Trierweiler’s revelations could well be a turn-off for many voters. “He looks like a man who really does not behave well at all,” says Colombe Pringle, a long-time observer of Elysée politics, and editorial consultant to the celebrity magazine Point de Vue. His bad behavior, she says, is “not only with his “toothless” remark but also in his daily life with women in general, and with her [Trierweiler] in particular.”

There is one woman to emerge stronger from this latest scandal: Marine Le Pen, who heads France’s far-right National Front party. This weekend’s IFOP poll showed that Le Pen would beat Hollande in a second-round presidential race, if the elections were held today—something that no far-right leader has come close to accomplishing in France. Delighted by the result, Le Pen told party members at a rally on Sunday that it “shows there is no longer a glass ceiling that would block our electoral victory.” Much could change between now and the next elections, which are two and a half years away, but for now, the upheaval in French politics appears a boost for Hollande’s foes.

In contrast to Le Pen’s buoyant speech, the woman at the heart of the roiling scandal—Trierweiler—quietly slipped out of France on Saturday, flying to Madagascar with a photographer on an unnamed assignment, according to the conservative Figaro newspaper. Politicians of all stripes have condemned Trierweiler for sullying the office of the president, by revealing prurient details best left unknown. “It is a disgrace for France,” Le Pen said of Trierweiler’s book. Even from over 5,000 miles away, Trierweiler might be wondering whether her tell-all book will backfire on her, leaving her as isolated as the two-timing president. “It will be very difficult for her to continue leading her life and being a journalist,” Pringle says. “I think she will pay a very high price.” 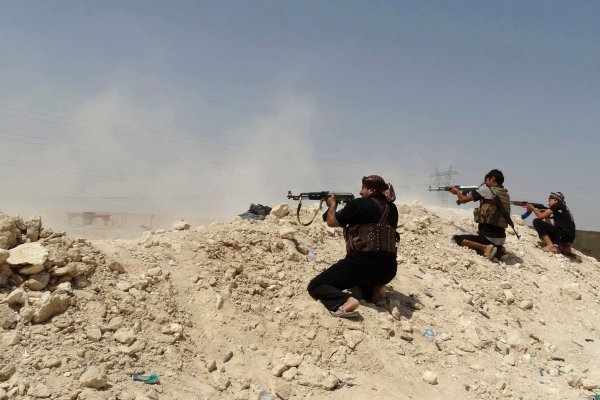 Dams Key to Saving Iraq From ISIS
Next Up: Editor's Pick