There Are at Least 500 Child Soldiers Fighting in Northeast India, and the World Hasn't Noticed

Security-force personnel patrol a village in the Chandel district of Manipur in 2012. The state is home to several insurgent groups who have ramped up the recruitment of child soldiers in recent years
Rupak De Chowdhuri—Reuters
By Arijit Sen / Imphal, India

Early one morning in 2012, three boys, all in their early teens, left their village in Manipur, a state in Northeast India on the Burmese border. They were being lured away on the promise of unspecified employment and a pledge that, in exchange for their labors, their parents would be taken care of.

The job, as it turned out, was one of killing. The boys were taken by a recruiting agent deep into the jungles of Burma (which is officially known as Myanmar) for military training. They had been shanghaied into a ragtag army waging a war against India for a banned rebel outfit, the Peoples’ Revolutionary Party of Kangleipak (PREPAK) — an insurgent group fighting for a separate homeland in Manipur.

“They took me and my two other friends to the temple,” says 15-year-old Tomba (whose name has been change to protect his identity). There, the boys had to vow never to run away.

They were kept in a small room, with a television set and wooden beds, for two days. On the third morning they were forced into a car and crossed the border near the town of Moreh. After walking for miles, they reached a training camp where they met seven more boys of their age.

Life in the training camp was hard. They had to wake up early for physical training and the food was inadequate. But there were slightly bigger boys with guns in smart, army habits. “The guns and the jackets I liked. I was told I’d have one of my own,” says Tomba’s friend, who, along with Tomba and the other boy, has now been released.

This is how child soldiers are being recruited, brainwashed and sent to the front lines of India’s insurgencies today.

In 2012, 10 boys were forcefully taken to insurgent training camps in Burma. Three were lucky — pressure from local rights groups forced their release.

Nineteen children were recruited in 2008. That year, a video was circulated by PREPAK depicting armed child soldiers parading in front of the cameras at a training camp in Burma.

Today, the numbers have soared dramatically. The Asian Centre for Human Rights says there are at least 500 child soldiers now in the Northeast — a region that comprises seven states ethnically, geographically and culturally distinct from the rest of India. “If they are convinced and thrilled by the guns and the life, it is very difficult to get them back,” says Annie Mangsatabam, who chairs a child-welfare committee in Manipur. “Even if they come back, they and their families are always at risk from the rebels.”

In March 2013, a 15-year-old girl from Manipur, Sanahanbi Khaidem, went missing. Within days of her disappearance, her mother received a call from the Revolutionary People’s Front — the political arm of the banned militant group People’s Liberation Army of Manipur. Sanahanbi, they informed the mother, was in their training camp in Burma. That same day in March, 14-year-old Alice Kamei, a school friend of Sanahanbi, disappeared as well. Her mother received a similar call.

The local police said they would try their best to get the girls back, but a year on nothing has changed. “Our hands are tied. We can’t go into Burma and rescue the girls,” says Titus Kamei (no relation to the missing girl Alice Kamei), who is part of a local rights group campaigning for their release.

The silence of the Indian government exacerbates the situation. New Delhi refuses to recognize the existence of child soldiers and insists there are legislative provisions that prevent involvement of children in armed conflict. The on-ground reality is very different.

There are at least 30 militant outfits spread over the hills and valleys of Manipur. Many have training camps in Burma. And there are conflicts that have been dragging on for at least five decades in Northeast India. To contain them, New Delhi enforces the Armed Forces Special Powers Act — a special legislation first introduced in 1958 to contain Naga insurgents. It allows security forces to arrest, detain and kill, without fear of prosecution.

According to a petition submitted to India’s Supreme Court in October 2012 by Manipur’s Extrajudicial Execution Victim Families’ Association and other NGOs, 1,528 civilians, including 98 children, were killed by security forces in Manipur between 1979 and 2012. Unsurprisingly, such brutality has alienated the locals, aggravated the conflicts and formed a ready pool of would-be insurgents

Poverty also plays a role. The seven states of Northeast India rank lowest in terms of infrastructure development, and most of the child soldiers are recruited from very poor families. “I was promised a cell phone,” says one of the boys recruited with Tomba.

Representatives of insurgent groups have asked campaigners in Manipur to lie low on the issue of child soldiers. Their message is simple: “Back off.” And despite India’s attempt to fence part of its border with Burma in Manipur, to prevent the free movement of militants, not much has changed. The recruitment of children into insurgent armies does not upset the political equilibrium in New Delhi. Other than their families, no one really cares about the children who go missing only to reappear in uniform — armed, and at the same time piteously vulnerable.

An earlier version of this article misspelled the surname of the child-welfare-committee chairperson. She is Annie Mangsatabam, not Mangsatbam. It also misspelled the given name of one of the missing girls. She is Sanahanbi, not Sahanabi. 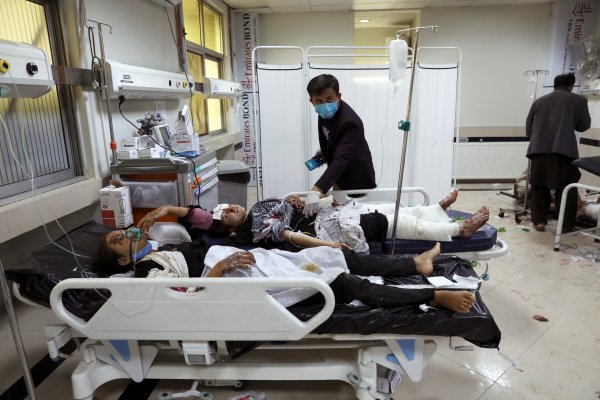 Bomb Kills at Least 30 Near Afghanistan School
Next Up: Editor's Pick