A Kashmiri man evacuates an elderly woman to a higher ground at a flooded road in Srinagar on Sept. 7, 2014
Danish Ismail—Reuters
By Rishi Iyengar

Large parts of Kashmir remain inundated by widespread floods that have rendered homes, hospitals and army bases completely submerged, prompting the New Delhi government to rush to the disputed territory’s aid. Some 175 people have so far died from the rising waters.

Indian Prime Minister Narendra Modi flew over the Kashmir Valley and held meetings with Kashmir chief minister Omar Abdullah and other state officials on Sunday, according to Reuters.

Srinagar, the capital and largest city of both Kashmir and the Indian state of Jammu, saw water levels continue to rise despite the halting on Saturday of the torrential rains that had thrashed the northern region all week. Indian news channel NDTV reported floods two or three stories high in parts of the city.

Most people living in low-lying areas were caught unawares, and thousands remained stranded on rooftops waiting to be rescued.

“This is a national-level disaster,” said Modi, who announced more than $180 million in relief aid to the state, along with compensation to those who lost family members or were grievously injured in the flooding.

The region has been without electricity for several hours, and many important roads and phone lines have been damaged, causing widespread panic as people struggle to contact stranded relatives. Kashmiris have taken to social media in order to coordinate the relief efforts more effectively.

The overflowing of the Jhelum river that cuts through the region has also caused landslides and flooding in neighboring Pakistan, where the death toll has also risen to 170. Modi extended a helping hand to Pakistan-occupied Kashmir, saying “the government of India is ready to provide humanitarian assistance to those areas if the Pakistan government needs it.”

Kashmir has long been a disputed region that both India and Pakistan claim, and its history has been marked by communal violence and border skirmishes between the two neighbors. Some 180 officers posted on the Indo-Pakistan border were evacuated on Sunday, according to the Times of India.

The Indian army and air force have rescued over 13,000 people from various areas, and the country’s National Disaster Response Force has deployed 70 boats and five rescue teams to aid the relief effort. Aircraft carrying food, water and medical supplies have also been dispatched.

Footage shows floodwaters destroying a bridge in Jammu and residents trying to go about their daily life in Srinagar on Sept. 7, 2014. 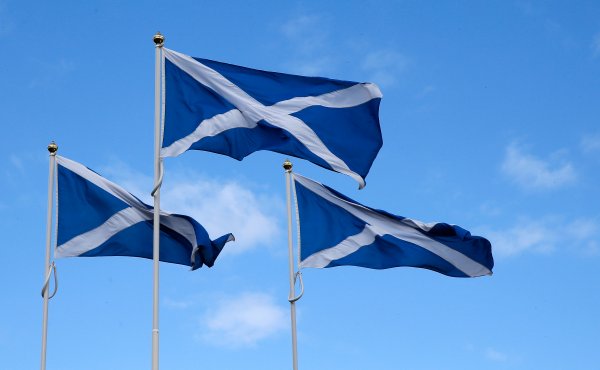 Britain Promises More Powers to Scotland if Vote Fails
Next Up: Editor's Pick