Well, the pitchforks are already sharpened and the torches lit anyway, so rather than let them go to waste, why not drag another so-called racist before the court of public opinion and see how much ratings-grabbing, head-shaking and race-shaming we can squeeze out of it? After all, the media got so much gleeful, hand-wringing mileage out of Don Sterling and Michael Brown.

The only problem is that Atlanta Hawks controlling owner Bruce Levenson is no Donald Sterling. Nor is his email racist. In fact, his worst crime is misguided white guilt.

I read Levenson’s email. Here’s what I concluded: Levenson is a businessman asking reasonable questions about how to put customers in seats. In the email, addressed to Hawks president Danny Ferry, Levenson wonders whether (according to his observations) the emphasis on hip-hop and gospel music and the fact that the cheerleaders are black, the bars are filled with 90% blacks, kiss cams focus on black fans and time-out contestants are always black has an effect on keeping away white fans.

Seems reasonable to ask those questions. If his arena was filled mostly with whites and he wanted to attract blacks, wouldn’t he be asking how they could de-emphasize white culture and bias toward white contestants and cheerleaders? Don’t you think every corporation in America that is trying to attract a more diverse customer base is discussing how to feature more blacks or Asians or Latinos in their TV ads?

Back when the original Law & Order first launched, there was a cast shake-up that added more women, reportedly in an effort to attract more female viewers. MTV shows like Finding Carter and Teen Wolf can’t get through an emotional scene without a pop song coming in to sing to the viewer what they should be feeling, because that’s what their demographic wants. Car companies hire specialized advertising agencies to create ads to appeal specifically to women, blacks and Latinos. That’s business.

Sure, there are a few assumptions he makes that make me cringe a little. For example: “My theory is that the black crowd scared away the whites and there are simply not enough affluent black fans to build a significant season ticket base.” On the other hand, I have no evidence that he’s wrong on either count. Even if he is, the question still needed to be raised, because racism is a realistic possibility as to why whites in Atlanta may not be coming.

To Levenson’s credit, in that same paragraph, he dismisses fans who complained about the arena’s site as code for racist fear that “there are too many blacks at the games.” He further decries the white perception that even though the percentage of blacks in attendance had lessened, they still feel it’s higher and therefore somehow threatening. His outrage seems authentic.

Businesspeople should have the right to wonder how to appeal to diverse groups in order to increase business. They should even be able to make minor insensitive gaffes if there is no obvious animosity or racist intent. This is a business email that is pretty harmless in terms of insulting anyone — and pretty fascinating in terms of seeing how the business of running a team really works.

The thing that makes me mad is that Levenson was too quick to rend his clothing and shout mea culpa. In his apology, he wrote, “By focusing on race, I also sent the unintentional and hurtful message that our white fans are more valuable than our black fans.” But that’s not the message in the email at all. If the seats had been filled, even if by all blacks, the email wouldn’t have been written. He wasn’t valuing white fans over blacks; he was trying to figure out a way to change what he thought was the white perception in Atlanta so he could sell more tickets. That’s his job.

Abdul-Jabbar is a six-time NBA champion and league Most Valuable Player. Follow him on Twitter (@KAJ33) and Facebook (facebook.com/KAJ). He also writes a weekly column for the L.A. Register. 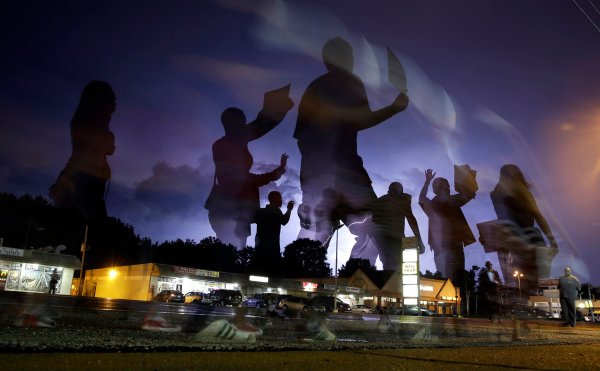 Reparations Could Prevent the Next Ferguson
Next Up: Editor's Pick