U.S. Strikes in Iraq Against Jihadists, Moving West Toward Syria

A Kurdish fighter primed for action against ISIS in the northern Iraq town of Khazir on Sunday.
Ahmed Jadallah / Reuters
By Mark Thompson

The U.S. military took a unilateral giant step toward bombing targets inside Syria over the weekend as it swung its crosshairs west and began bombing Islamic militants in the western Iraq province that borders Bashar al-Assad’s war-ravaged country.

President Obama said Sunday he will detail his plans for destroying the Islamic State in Iraq and Syria in a speech to the nation Wednesday. “The next phase is now to start going on some offense,” he said on NBC’s Meet the Press. “And ultimately we’re going to defeat them.”

He made clear—twice—that international borders won’t hamper U.S. efforts. “We will hunt down [ISIS] members and assets wherever they are,” he said. “I will reserve the right to always protect the American people and go after folks who are trying to hurt us wherever they are.”

Wherever. That means only one thing: Syria is the next stop on the road to defeating the Islamic jihadists.

“You don’t want to give them sanctuary at all,” says Anthony Zinni, former chief of U.S. Central Command, which oversees the region. “You can’t have a Pakistan,” where U.S. military efforts in Afghanistan have been frustrated by enemy forces who could scoot across borders to escape U.S. attacks. “They’ll simply regroup inside Syria and then re-attack—that’s stupid” if allowed to happen, the retired Marine general says.

The nation’s top military officer has already said rooting out ISIS’s Syrian haven is required for success. “Can they be defeated without addressing that part of the organization that resides in Syria?” Army General Martin Dempsey, chairman of the Joint Chiefs of Staff, said Aug. 21. “The answer is ‘no’.”

The challenge of any U.S. military action in Syria is to hurt ISIS without helping the government of dictator Assad, whose civil war against several rebel groups, including ISIS, has killed nearly 200,000 people over three years. “We are supporting the Syrian moderate opposition,” Defense Secretary Chuck Hagel said Sunday in Tbilisi, Georgia.

The strikes launched Saturday and Sunday marked the first acknowledged time in a month-long U.S. bombing campaign of nearly 150 strikes against ISIS that U.S. munitions hit targets in western Iraq’s Anbar province. Prior American attacks had been limited to northern Iraq.

Like earlier strikes, the Pentagon justified the weekend’s action as part of Obama’s two-pronged ISIS effort to protect U.S. interests in Iraq and prevent humanitarian disasters against the Iraqi people. Earlier strikes were needed to defend the Mosul dam from an ISIS takeover, the Pentagon said, due to fear that the militants might sabotage it and send a 60-foot cascade of water down the Tigris River, threatening residents of Mosul.

The U.S. military used a similar justification for the weekend’s strikes on ISIS units near Anwar’s Haditha dam on the Euphrates River. “The potential loss of control of the dam or a catastrophic failure of the dam—and the flooding that might result—would have threatened U.S. personnel and facilities in and around Baghdad, as well as thousands of Iraqi citizens,” Rear Admiral John Kirby, the Pentagon spokesman, said in a statement.

The attacks in Anbar—even if from the sky— mark a watershed return for the U.S. to the Sunni-dominated province where American forces fought several of the Iraq war’s most deadly battles before leaving the country nearly three years ago. It’s a tacit acknowledgement that the U.S. withdrawal—aided and abetted by a recalcitrant Iraqi government—was premature.

The Anbar action comes nine months after ISIS forces took control of Fallujah, one of its main cities and the site of some of the 2003-2011 war’s bloodiest battles between U.S. forces and Iraqi insurgents. Some U.S. military officers believe Washington should have begun stepped-up military action back then.

Military experts are divided on how well the Obama Administration has handled the ISIS threat. Lawrence Korb, a former assistant defense secretary in the Reagan Administration, praises the President’s methodical approach. “You make it clear we’re going to get these guys,” says Korb, now with the Center for American Progress think tank, “just like we got [Osama] bin Laden.”

Others suggest partisanship at home has hobbled the U.S. effort to deal with ISIS. “Our nation is suffering this current distraction because of our inability to reach a consensus on how to deal with the crisis in Syria over a year ago,” says Jerry Hendrix, a naval flight officer who went on to serve as the Navy’s top historian before retiring from the service as a captain two months ago. Hendrix, now a senior fellow at the Center for a New American Security, blames “the hyper-partisan atmosphere and the continuous election campaign we find ourselves in” for the delay.

For his part, Zinni finds what he sees as Obama’s foot-dragging distressing. “The President’s job is not to put his finger up and test the political winds,” he says. “It’s to make a decision based on threats to our people and interests, and then explain to the American people why he’s doing it.”

Obama gets his chance Wednesday, the eve of the 13th anniversary of the 9/11 attacks. 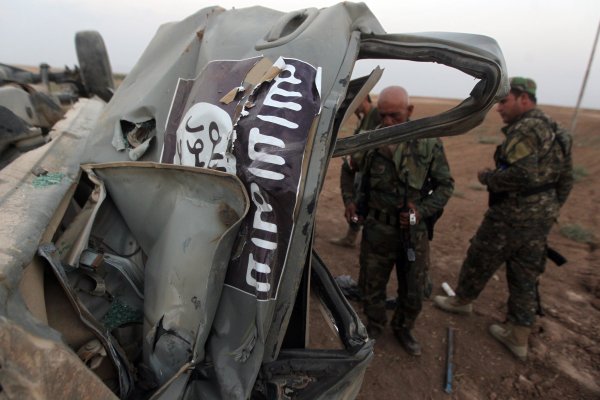 Why the U.S. Won’t Buckle Under ISIS Pressure
Next Up: Editor's Pick