Atlanta Hawks co-owner Bruce Levenson cheers from the stands in the second half of Game 4 of an NBA basketball first-round playoff series against the Indiana Pacers in Atlanta, April 26, 2014.
John Bazemore—AP
By Maya Rhodan

Atlanta Hawks owner Bruce Levenson said Sunday he will sell his shares of the team after admitting to sending racist emails in regard to the Hawks’ fan base.

In a statement released Sunday, Levenson said he voluntarily reported the 2012 email chain to the National Basketball Association in July because he believes the league should have a “zero tolerance for racism.” Though the NBA has not yet completed its independent review of the emails, Levenson said Sunday he will sell his controlling interest in the Hawks franchise.

“I’m truly embarrassed by my words in that e-mail, and I apologize to the members of the Hawks family and all of our fans,” Levenson said in a statement published in full on Basketball Insiders.

In the 2012 email, Levenson said he “trivialized our fans by making clichéd assumptions about their interests (i.e. hip hop vs. country, white vs. black cheerleaders, etc.) and by stereotyping their perceptions of one another (i.e. that white fans might be afraid of our black fans).”

“By focusing on race, I also sent the unintentional and hurtful message that our white fans are more valuable than our black fans,” Levenson said. “If you’re angry about what I wrote, you should be. I’m angry at myself, too. It was inflammatory nonsense.”

NBA Commissioner Adam Silver said in his own statement Sunday that he commends Levenson for “putting the best interests of the Hawks, the Atlanta community, and the NBA first.”

Hawks CEO Steve Koonin will reportedly oversee team operations as the squad seeks a buyer. The Hawks owner’s response stands in stark contrast to the ugly removal of former Los Angeles Clippers owner Donald Sterling, who was forced to sell his team and banned from the NBA following the publication of phone recordings in which Sterling made racist comments. 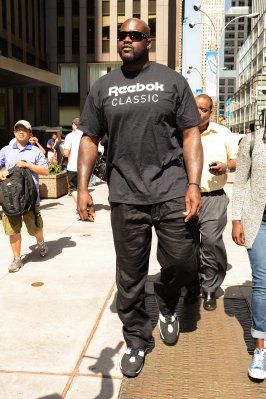 Shaq Applies to Join Reserve Police Force in Florida
Next Up: Editor's Pick