3 Ways to Save Thailand's Election From Disaster

Residents in Bangkok are on edge. After four years of tenuous peace in the capital, Bangkok appears poised for another round of violence this weekend. Thailand‘s urban elite and middle class residents have grown desperate after protests shutting down the capital’s streets for weeks have failed to unseat Prime Minister Yingluck Shinawatra. The protesters have now taken the troubling step of directly disrupting the country’s electoral process and are vowing to prevent potential voters from casting their ballots during the country’s snap elections on Sunday.

In the four years since the country’s military unleashed a bloody crackdown on thousands of massed Red Shirts—working class and rural voters largely from the country’s northern rice bowl who support the current government—the Thai capital enjoyed an uneasy calm. While hatred between Thailand’s warring parties continued to simmer, it didn’t boil over into outright conflict.

But that fragile truce has collapsed. What began with a failed passage of an amnesty bill late last year that would have paved the way for the return of controversial Prime Minster Thaksin Shinawatra led to mass protests and the eventual dissolution of the government by the country’s current leader, Yingluck, who is also Thaksin’s sister. Snap polls were scheduled for February 2 in order to elect a new government. In response, the opposition Democrat Party (and its ‘Yellow Shirt’ supporters), which has failed to score a major victory at the ballot box since the early 1990s, boycotted the ballot box.

During an early round of voting last weekend, anti-government protesters, known as the People’s Democratic Reform Committee (PDRC), mobbed polling stations where would-be voters were jeered, intimated and in some cases violently attacked. Positions have hardened and Thailand’s political divide between rural and working class Thais who support the government and the urban elite who despise anyone associated with the Shinawatra clan continues to widen.

Now, when discussing “Teflon Thailand,” a sobriquet for Bangkok’s ability to keep the country’s tourism industry and economy humming despite political setbacks, analysts have begun to drop references to the possibility of outright civil war breaking out. With no end in sight to the country’s political deadlock, authorities and political leaders would be wise to watch out for three flash points this weekend in order to prevent clashes from erupting in the streets of Bangkok again.

Preventing violent confrontation
On Tuesday, Yingluck’s administration drew a line in the sand. She had the option of working out a deal with the largely anti-government (and anti-election) Election Commission during a meeting on Tuesday to delay the snap polls, after Thailand’s Constitutional Court made a ruling last week clearing the way for such a postponement. However, the Prime Minister refused to delay the polls and succumb to the opposition’s ongoing war of attrition against her government. Now the ball is back in PDRC leader Suthep Thaugsuban‘s court and it’s up to the former deputy prime minister to rein in his seething supporters, who remain committed to ridding the country of any trace of the Shinawatra political machine.

The protest leader had previously called on his supporters to make sure that the Feb. 2 elections do not take place. But he backtracked on Wednesday night and said the PDRC would not interfere with this election. It’s hard to know how sincere Suthep is with this latest proclamation (he was back in the streets, leading demonstrations on Thursday), but according to Human Rights Watch senior researcher Sunai Phasuk, anti-government supporters in southern Thailand have already begun besieging post offices to prevent the delivery of ballots to polling stations, which has effectively blocked the voting process in those areas. So unless the anti-government leader issues a firm reversal of his stance and calls off the blatant obstruction of voting, then confrontation may be inevitable.

Law enforcement is a priority (and the military must let the police do their job)
Unlike its rival, Democrat predecessor, Yingluck’s government has command over Thailand’s police force. However, to prevent all hell from breaking loose out on the streets, the police will actually have to enforce the law and arrest people who perpetrate violence. This will be a tall order to fill considering both the police and the administration are under severe pressure from the military—whose allegiance is largely to the crown and not necessarily the government—to ensure that protesters are not injured during the demonstrations.

The PDRC have largely taken the military’s stance as a license to act with utter impunity in the capital and take over government buildings and obstruct the democratic process at will. While the government has promised to put more police on the capital’s streets on Sunday, it will likely make little difference unless Thailand’s coup-happy armed forces distinctly changes their tone and handling of the crisis.

Rein in Third Party Elements
In the three months since mass protests have erupted at least 10 people have been killed and more than 200 people injured. However, this week a disturbing development surfaced when a military-grade explosive was deployed against an anti-government protest camp. While the explosion reportedly injured only one person, the presence of the M-79 grenade provided evidence that a shadowy militant force known as the Black Shirts may have entered the fray and may now be targeting the PDRC. According to HRW, the M-79 is the weapon of choice for the militants.

While the group has never been properly identified, they’re known to have operated in tandem with the Red Shirts during the violent street battles in the capital in 2010 and engaged in daily assaults on security forces that eventually led to the military crackdown that left more than 80 people dead and 2,000 injured. The possible entry of this militant group does not bode well for peace and could eventually bring the military into the fighting on the streets unless police step up their efforts to bring the elusive group to justice.

Following the grenade attack and shootings earlier this week, the PDRC masses are seething and, as Sunai reports, ready for combat. On the other side of Thailand’s color-coded spectrum, supporters of Yingluck’s embattled administration are also smoldering with resentment after the anti-government protesters assaulted voters openly and remain dedicated to preventing the country’s rural and working class voters from keeping the government of their choosing in power. Unless Thailand’s political and protest leaders drastically change their calculus in the next 24 hours, bloodshed is likely and there won’t be much smiling in the “Land of Smiles.” 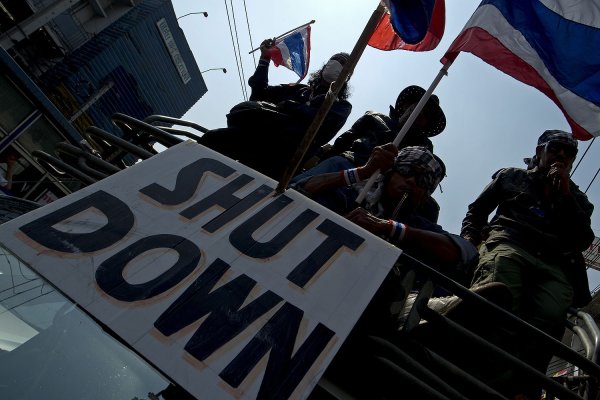 Thai Elections Could be Postponed, in Fresh Blow for Yingluck
Next Up: Editor's Pick