Marco Grob for TIME
The former Secretary of State, now 91, argues for a moral but rational foreign policy in the age of terrorism
By Walter Isaacson

When Henry Kissinger talks about world order, to some it might seem as if he is living in a previous century. The 17th, perhaps. Beginning with his Harvard doctoral dissertation 60 years ago, he has extolled the concept of international order that was established in 1648 by the Peace of Westphalia, which ended the Thirty Years’ War. Instead of being shaped by wars of religion and the death spasms of the Holy Roman Empire, Europe’s international system was thenceforth based on independent nation-states, each sovereign over religion and other issues in its own territory. States would not interfere in the internal affairs of other states, and order would, ideally, be maintained by clever statesmen who focused on national interests and curated a balance of power.

Kissinger’s appreciation for order, he later recalled, came after his family fled Hitler’s Germany in 1938 and arrived in New York, where he realized he did not have to cross the street to avoid non-Jewish boys who might beat him up. Kissinger became an exemplar of the realist, as opposed to idealist, school of diplomacy, someone who believed that a foreign policy that is overly guided by moral impulses and crusading ideals was likely to be dangerous. “The most fundamental problem of politics,” he wrote in his dissertation, “is not the control of wickedness but the limitation of righteousness.”

Kissinger’s fellow students in Harvard’s government department scoffed at his choice of topic. The atom bomb, they contended, had fundamentally changed global affairs. One snidely suggested he should transfer to the history department.

Likewise, we are tempted to raise an eyebrow at the news that Kissinger, now 91, has produced another paean to the Westphalian system, his 17th book in 60 years, this one titled simply World Order. Respect for sovereignty? How quaint! Hasn’t he heard that in the 21st century, threats respect no borders, the world is flat, and we have a humanitarian duty to protect people in places where regimes are repressive? That is why we rejected realist thinking for a “Freedom Agenda” that included invading Iraq to make the Middle East safe for democracy, toppling Muammar Gaddafi in Libya under a humanitarian banner and seeking (well, at least until ISIS came along) to do the same to President Bashar Assad in Syria.

Hmmm…upon reflection, maybe throwing out the Westphalian system, forsaking the principle of respect for sovereignty and letting idealism overwhelm ­realism wasn’t such a good idea after all. And if that’s the case, then Kissinger’s World Order doesn’t seem dated at all. The U.S. might do well to heed his prescription that it alloy its idealism with a new dose of realism. “Westphalian principles are, at this writing, the sole generally recognized basis of what exists of a world order,” he notes.

Kissinger’s book takes us on a dazzling and instructive global tour of the quest for order, from Cardinal Richelieu to Metternich and Bismarck, the Indian minister Kautilya of the 4th century B.C. and the Ottoman Sultan Suleiman, and a succession of American Presidents beginning with Teddy Roosevelt and Woodrow Wilson, all culminating in a world order based on sovereign nation-states at the end of World War II. “By the mid-20th century,” Kissinger writes, “this international ­system was in place on every continent.”

When he was the co-pilot of American statecraft as Richard Nixon’s National Security Adviser and Secretary of State in the early 1970s, Kissinger was able to manipulate the levers of this system with a mastery that would have mesmerized Metternich. Eschewing our differences in ideologies and values, he forged a détente with the Soviet Union and an opening to China, then played off both to create a triangular balance of power that preserved the U.S.’s influence after its retreat from Vietnam.

But sustaining such a values-neutral pursuit of strategic interests is difficult in a democracy that celebrates its moral exceptionalism. “The United States has alternated between defending the Westphalian system and castigating its premises of balance of power and noninterference in domestic affairs as immoral and outmoded,” he writes. Because he and Nixon failed to weave in the idealism that is ingrained in the American DNA, popular support for their realist edifice was precarious, as if built of bricks without straw. Kissinger was attacked by moral idealists of the left and, more notably, by the nascent neoconservatives and ardent anticommunists on the right. Reaction against his realism contributed to the elections of both Jimmy Carter and then Ronald Reagan.

Although Kissinger routinely notes the importance of America’s idealism, he almost invariably follows with the word but. “America would not be true to itself if it abandoned this essential idealism,” he writes. “But to be effective, these aspirational aspects of policy must be paired with an unsentimental analysis of underlying factors.” This “yes, but” balance, with the emphasis always tilting to the but sentence, pervades Kissinger’s analysis and peppers every chapter of his book.

The need for a renewed realism, Kissinger convincingly argues, is especially true in the Middle East, where jihadists have shattered the nation-state system in their quests for global revolution based on extremist religious values. This dangerous upheaval was facilitated in part by the U.S.’s morally motivated but strategically dubious decisions to support regime change and Western-style democracy in Iraq, Libya, Egypt, Afghanistan and Syria.

On Afghanistan, Kissinger supported the initial attack on al-Qaeda and its Taliban protectors, but he looks back skeptically on the broader mission that had evolved by 2003. “The central premise of the American and allied effort became ‘rebuilding Afghanistan’ by means of a democratic, pluralistic, transparent Afghan government whose writ ran across the entire country,” he writes. But this “radical reinvention of Afghan history” was not achievable. “No institutions in the history of Afghanistan or of any part of it provided a precedent for such a broad-based effort.”

Likewise on Iraq, Kissinger initially supported the mission to topple Saddam Hussein, but he says, “I had doubts, expressed in public and governmental forums, about expanding it to nation building and giving it such universal scope.” He blames George W. Bush and his Administration for pursuing idealistic crusades that ignored earthly realities. As Bush put it in a 2003 address, “Iraqi democracy will succeed—and that success will send forth the news, from Damascus to Tehran, that freedom can be the future of every nation.” This ideal was, Kissinger notes, unmoored from realities. “To seek to achieve [American values] by military occupation in a part of the world where they had no historical roots,” he writes, “imbued the American endeavor in Iraq with a Sisyphean quality.”

Despite heart surgery this year, Kissinger at 91 is a lion in a prolonged winter. Four decades after he last served in government, he is a fixture on the New York–Washington Acela, and he makes regular trips to Russia and China, where he is still accorded meetings with top leaders. His analyses remain prescient. Just as the showdown over chemical weapons in Syria was building last year, Kissinger was at a New York City dinner where various military and intelligence experts were discussing what might happen. Kissinger predicted that Russia would suddenly step in and offer a way to resolve the chemical-weapons issue, since it and the U.S. shared a strategic interest in not having such weapons fall into terrorist hands. Two weeks later, that is precisely what happened. He also argued that it was a mistake to make the ouster of President Assad’s regime a policy objective without knowing what would replace it, because that was likely to lead to a chaotic civil war dominated by the most radical of the jihadist forces.

For his undergraduate thesis in 1950, Kissinger tackled “The Meaning of History.” At 383 pages, it attempted to tie together the philosophies of Immanuel Kant, Oswald Spengler and Arnold Toynbee, while roping in ideas from Descartes, Dostoyevsky, Hegel, Hume, Socrates and Spinoza. It was topped off with a section called “A Clue From Poetry,” featuring Dante, Homer, Milton and Virgil. At one point he declared, “Descartes’ cogito ergo sum was not really necessary.”

Kissinger ends his latest book on a different note, one of humility—a trait that for most of his career he was better at humorously feigning than at actually possessing. “Long ago, in youth, I was brash enough to think myself able to pronounce on ‘The Meaning of History,’” he writes. “I now know that history’s meaning is a matter to be discovered, not declared.”

The key to Kissinger’s foreign policy realism, and the theme at the heart of his magisterial new book, is that such humility is important not just for people but also for nations, even the U.S. Making progress toward a world order based on “individual dignity and participatory governance” is a lofty ideal, he notes. “But progress toward it will need to be sustained through a series of intermediate stages.”

Isaacson is the CEO of the Aspen Institute and a former managing editor of Time. He is the author of biographies of Henry Kissinger, Benjamin Franklin, Albert Einstein and Steve Jobs, and of The Innovators: How a Group of Hackers, Geniuses, and Geeks Created the Digital Revolution, to be published in October 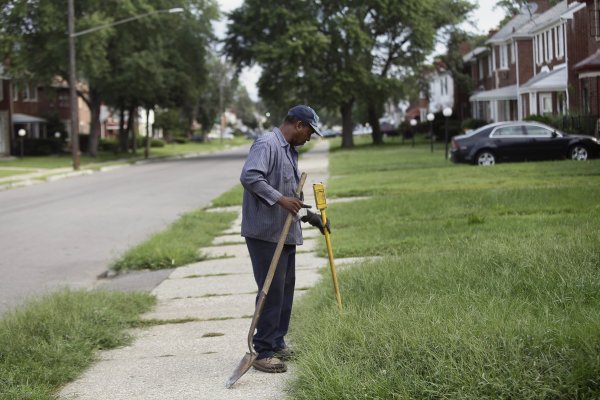 A Plan to Fix All of America's Detroits
Next Up: Editor's Pick