A Plan to Fix All of America's Detroits

A worker from Homrich turns off water supply to a home August 27, 2014 in Detroit, Michigan. The Detroit Water and Sewer Department have disconnected water to thousands of Detroit residents who are delinquent with their bills.
Joshua Lott—Getty Images
By Ponsella Hardaway , Peter Hammer and John Powell

A bankruptcy hearing opened Tuesday in the Motor City, and the fate of that great city and others suffering like it will soon come into clearer focus.

What is not fully appreciated, however, is that the conditions triggering Detroit’s decline – a cash flow crisis generated by state funding slashed by state legislators, and from the city’s dwindling population, predatory lending to municipalities and homeowners, and suburbanization without equitable regional planning – are present in scores of other municipalities.

Municipal distress and bankruptcy isn’t a local problem – it’s a national one. It is not brought on by inadequate municipal governance or local mismanagement.

A majority of our country’s cities experience some form of financial distress. More than two dozen American cities find themselves in bankruptcy and receivership. Furthermore, state appointment of emergency managers, who lead a city’s restructuring plan, displace democratically elected local officials. In Michigan, a majority of the state’s residents of color—mostly African Americans—have been disenfranchised by living in cities shaped by emergency managers. Assessing the technical merit of emergency manager decisions is not relevant. In a democracy, the question centers on who decides.

Our ongoing project, Beyond Bankruptcy: Regional Economic Equity, has brought together experts and community organizers to examine Detroit’s status and assess the struggles of similar cities. At this time, the inquiry has led to a three-pronged prescription to ease Detroit’s ills now and on how to raise aspirations for its future. A fairer and more sustainable plan for Detroit is not limited to these three proposals below, but they underscore the need for greater creativity and raising the bar for policy outcomes.

First, the city currently manages the water and sewer system and is exploring two options for restructuring: turning operational control over to the newly formed regional authority and/or privatization. However, city management of this asset is key to Detroit’s long-term fiscal health, and the value of its service, if restructured, could financially support other city services. It merits far more attention than it has received to date.

Second, a novel implementation of a city’s power of eminent domain can be an antidote to financially distressed communities. The foreclosure crisis and the great recession have destabilized many cities and significantly contributed to municipal insolvency. They have lowered property values, reduced municipal revenue from property taxes and imposed an additional financial burden for municipalities dealing with vacant properties. In the Detroit metro area, for example, 28% of the homes are underwater; in the city of Detroit, the figure is 47%.

In our proposed application of “reverse” eminent domain, the city becomes the party acquiring the mortgage notes in a trade typically occurring exclusively among financial institutions. The city acquires the mortgage note at fair market value using reverse eminent domain. In turn, the city refinances the new loan with lower monthly payments. All the while, the homeowner remains in the home, benefiting from this novel form of refinancing.

Richmond, Calif., has unveiled a plan to exercise eminent domain in a way that would reduce homeowners’ monthly mortgages, which are underwater by about $700 million in 2013. The Detroit Free Press recently reported on the housing system in Detroit—72,000 homes in Detroit have faced foreclosure since the great recession, and 50,000 more are at risk in Detroit and Wayne County. These figures and the burden placed on communities and residents of color, underscore the need to build equity and fairness through any future housing plan. Currently, the Detroit Blight Removal Task Force and the Detroit Future City plan lacks sufficient attention to city planning and lacks any attention to a regional focus that may leverage and attend to metro area resources. Instead the plan’s focus on blight removal and city-level planning can entrench Detroit’s isolation. Reverse eminent domain can ameliorate this housing crisis and stabilize communities.

Finally, the legality of certain financial products carrying unreasonable risk and marketed to multiple municipalities should be brought before the courts. The use of interest rate swaps and other municipal finance products extends far beyond Detroit and significantly contributes to municipal distress. To date, there have been limited challenges to the enforcement of contract terms associated with these instruments. Should these financial products be found illegal, cities may recover hundreds of millions of dollars already paid to banks, in addition to being relieved of any obligations to pay onerous termination fees. Bankruptcy Judge Steven Rhodes has suggested this is a probable outcome from a legal challenge in Detroit. Going forward, the financial mechanisms and decisions surrounding risk management at the municipal scale must be dramatically reformed. Structural change is required for structural problems.

Cities can take actions to create equity and healthy outcomes during the most distressing financial conditions. These corrective measures can mitigate the drivers of municipal insolvency and bankruptcy. These steps can forge innovative private and public partnerships and create an equitable economic, cultural and social environment for all residents.

Someday soon, we want Detroit to be synonymous with urban recovery, resilience and a pathway to a better urban future. 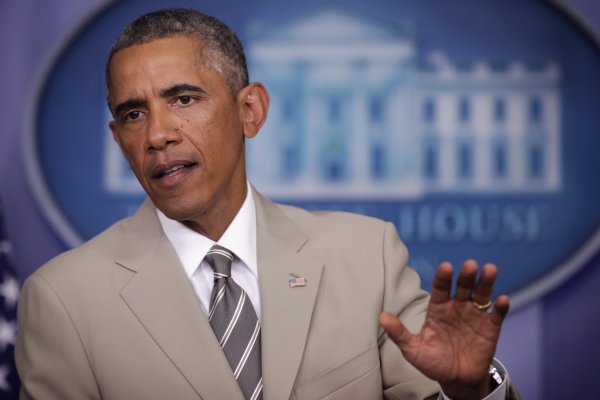 Shut Up Already About Obama's Tan Suit! Let's Talk Substance Over Style
Next Up: Editor's Pick