Here's Bill Murray on the Cover of TIME

The Toronto Film Festival made news this week with the announcement that they were declaring Friday, Sept. 5, Bill Murray Day. At the film festival, that day would be marked with screenings of the legendary actor’s past films, a costume contest and the premiere of his latest movie, St. Vincent.

That constitutional convention, the magazine continued, cost Alfalfa Bill $4,000 out of his own pocket, secured via a mortgage on his alfalfa ranch. He never got paid back at the time, but he did serve two Congressional terms and run for governor, winning in 1930 using the slogan “The common people will never be still / till Alfalfa Murray is Governor Bill.”

On the occasion of his election in 1930, TIME noted that he “boasts of drinking his coffee from the saucer, rarely bathes, and [said] he would rent the executive mansion and live in the garage.” His nickname came from his strident advocacy of alfalfa as a hay plant suitable to Oklahoma soil, he was a member of the Chickasaw tribe by marriage and, though his personal library contained 5,000 books, he spent a whole of $500 on his successful gubernatorial campaign, during which he lived mostly on cheese and crackers. To amuse crowds while stumping, he would stand on his head. And, in 1932, when he (unsuccessfully) tried to get the Democratic nomination for President, he made the cover of TIME, with a lengthy profile inside (from which the facts above are drawn). His campaign song was called “Hoover Made a Soup Houn’ Outa Me” and his campaign slogan was “Bread, Butter, Bacon, Beans.”

Following his loss, he remained out of the public eye for years, writing books — including a 1,683-page memoir — and encouraging others to follow his early strain of doomsday-prepper mentality. In 1948, he showed up at the Dixiecrat convention — the convention of segregationist Southern states-rights Democrats —where he showed himself to be more sinister than charming, boasting that he was “the man who introduced Jim Crow in Oklahoma.”

He died in “prideful poverty” in 1956, at 86. By then it was becoming clear that no amount of headstands could bring him back to the right side of history — but, in any case, he soon ceded the Bill Murray title. That Bill Murray first showed up in the pages of TIME in a 1978 story about the Harvard Lampoon, destined to forevermore eclipse his forebear in the wacky-story department.

Read Richard Corliss’ 1993 profile of Bill Murray — the actor, not the politician — here, in TIME’s archives: Bill Murray in the Driver’s Seat 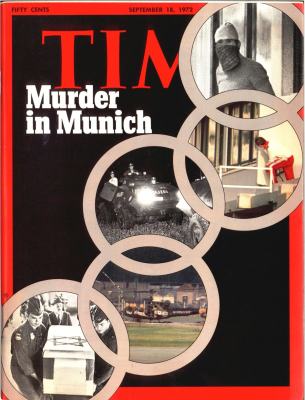 "Murder in Munich": A Terrorist Threat Ignored
Next Up: Editor's Pick