The Myth of the Invisible Jetsetting Jihadi

If you believe the cable-news-o-sphere regarding American extremists fighting with the Islamic State, you might think a plane ticket is all that separates these “homegrown” fighters from executing a terrorist attack on U.S. soil. That some Americans – and Europeans – are flocking to Iraq and Syria to join forces with jihadist groups is certainly concerning. But making the jump from travel ease to terrorism overlooks a major American strength that’s proven to thwart attacks: local communities and domestic law enforcement.

It’s a bipartisan mistake to ignore this powerful dynamic, but the most recent example is John McCain and Lindsey Graham’s op-ed in the New York Times. “ISIS is now one of the largest, richest terrorist organizations in history,” they write. “It occupies a growing safe haven the size of Indiana spanning two countries in the heart of the Middle East, and its ranks are filled with thousands of radicals holding Western passports, including some Americans. They require nothing more than a plane ticket to travel to United States cities.” Senator Dianne Feinstein, a California Democrat and Senate Intelligence Committee Chair gave McCain and Graham’s analysis a boost telling NBC, “This [the Islamic State] is a vicious, vicious movement. And it has to be confronted. I think Senator McCain and Senator Graham really laid the basis in Saturday’s New York Times in an op-ed for confrontation. And I happen to agree with what they said.”

The insinuation in McCain and Graham’s op-ed, of course, is that once one of these extremists enters an American city, they’ll have a quick and easy path to executing a terrorist attack. That’s inaccurate. Once in an American city, an extremist must still acquire weapons. And if he plans to conduct a large-scale strategic attack (rather than a lone wolf-type shooting), he must also connect with others, engage in planning and surveillance activity, and finally prepare and carry out the attack. All of these steps are constrained by the willingness and ability of local Muslim and non-Muslim communities to report extremist and suspicious activity, as well as by the domestic efforts of law enforcement.

Indeed, according to data collected by New America, about one-third of “homegrown” Jihadists who have been charged or killed since the 9/11 attacks have been implicated by a tip from local community members or family members, almost nine percent have been implicated by strangers alerting authorities to suspicious activity, and almost half have been monitored by an informant.

On the other hand, cases where “only a plane ticket” led inevitably to an attack are outliers. Here, the go-to case is that of Moner Abu Salha, an American citizen who returned to the U.S. after receiving training from Jabhat al Nusra, the Syrian al Qaeda affiliate, before returning to Syria to conduct a suicide attack. As McCain told CNN’s Candy Crowley in early August while arguing against the Obama administration’s policy, “Candy, there was a guy a month ago that was in Syria, went back to the United States, came back and blew himself up. We’re tracking 100 Americans who are over there now fighting for ISIS. ISIS is attracting extreme elements from all over the world, much less the Arab world. And what have we done?”

Yet even in this case, we can see the constraining role of local communities. According to an NBC investigative report, when Abu Salha returned to the United States he tried and failed to recruit his friends to fight with him in Syria. What’s more, according to a senior law enforcement official quoted by NBC, one of those friends tipped off the FBI, which put Abu Salha on their radar as he returned to Syria.

In a propaganda video released after his death, Abu Salha made clear that he felt these constraints: “I stayed with my friend’s family. And it was no good. The reason I had to stay with them is that the state I was in, I finally realized I was being watched,” he says in the video.

Indeed, Douglas McCain – an American who died fighting with ISIS – was known to American authorities because of his social media activity. He was also on a terrorism watchlist in order to constrain his ability to return undetected to an American city.

Three years into the Syrian civil war, there has been only one lethal attack in the West – the murder of four people at a Jewish museum in Brussels by Mehdi Nemmouche, a veteran of the Syrian jihad. In the United States, no one returning from or seeking to join a Syrian jihadist group has even been charged with plotting an attack inside the United States. In comparison, there have been two deadly incidents in the United States committed by individuals motivated by far right ideology in the past six months. If thousands of extremists were only a plane ride away from American cities, one would hardly expect such a limited record of Syria related violence in the West.

None of this is to say that Jihadist groups in Syria should be allowed to fester and develop the capability to conduct attacks in the United States, or that it is impossible that a returning Syrian foreign fighter will evade the layered defenses that protect the American homeland. That Abu Salha was able to return undetected to the United States after participating in Jihadist training should concern law enforcement. The layered defense system may need reinforcement to deal with new challenges, but the constraints it imposes upon jihadist activity ought not be obscured, particularly when making the case that the threat posed by foreign fighters calls for military action. Doing so does a great disservice to the admirable efforts of Muslim communities, local and federal law enforcement, and American citizens in confronting Jihadist extremism at home.

David Sterman, a research associate at the New America Foundation and a master’s candidate at Georgetown’s Center for Security Studies. His work focuses on homegrown extremism and the maintenance of the New America Foundation’s datasets on terrorism inside the United States and the relative roles of NSA surveillance and traditional investigative tools in preventing such terrorism. This piece was originally published in New America’s digital magazine, The Weekly Wonk. 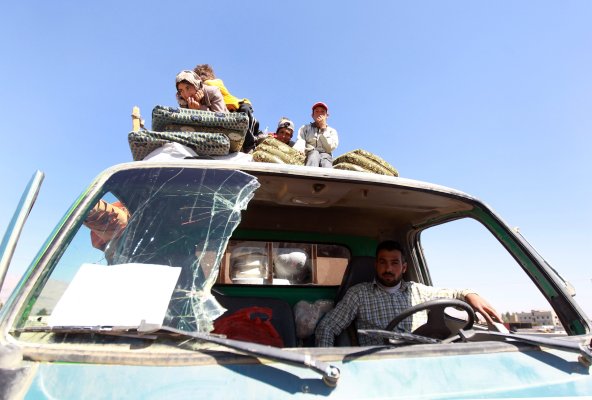 Diplomacy Is the Way To Beat the 'Islamic State'
Next Up: Editor's Pick