ISIS Is Not Just Un-Islamic, It Is Anti-Islamic

Militant Islamist fighters take part in a military parade along the streets of the northern Raqqa province in Syria, June 30, 2014.
Reuters
By Nihad Awad

Despite misappropriating and misusing the name “Islamic State,” ISIS is little more than a criminal gang that attaches itself like a leech to revered symbols of Islam. It exploits counterproductive Western policies driving desperate people into its fold and uses injustices in the Muslim world as a smokescreen to cover its own cruelty.

When ISIS uses the Islamic declaration of faith, the Shahada, and the Prophet Muhammad’s (peace be upon him) seal on its flag, it quite literally – and falsely – claims to uphold the banner of Islam. When ISIS says it is establishing a “Caliphate,” an historic term that resonates with Muslims worldwide, it does so to fool those who have experienced nothing but injustice and oppression into believing past glories will be restored.

Unfortunately, the media, political analysts and public officials – really all of us – are unwilling participants in ISIS’s public relations branding campaign.

Every time we refer to ISIS as the “Islamic State,” call its members “jihadists” or in any way grant it the religious legitimacy that it so desperately seeks, we simultaneously boost its brand, tarnish the image of Islam and further marginalize the vast majority of Muslims who are disgusted by the group’s un-Islamic actions.

Islam prohibits the extremism exhibited by ISIS. An essential part of the faith is moderation.

As the Quran, Islam’s foundational text, states clearly: “We made you to be a community of the middle way, so that (with the example of your lives) you might bear witness to the truth before all mankind.” (Quran, 2:143)

The Quran also states: “O you who believe! Stand out firmly for justice, as witnesses to God, even against yourselves, or your parents, or your kin, and whether it be (against) rich or poor: for God can best protect both.” (Quran, 4:35)

Literally, jihad means to struggle, strive and exert effort. It is a central and broad Islamic concept that includes struggle against evil inclinations within oneself, struggle to improve the quality of life in society, struggle in the battlefield for self-defense (e.g., having a standing army for national defense), or fighting against tyranny or oppression.

While Islam allows legitimate self defense, it prohibits the killing of non-combatants, even in times of war or conflict. Aggression is never permitted. “And fight in the cause of God those who fight against you, and do not commit aggression. Indeed God does not love those who are aggressors,” (The Quran, 2:190).

Extremist Muslims who commit crimes like those carried out by ISIS should be called criminals. We must not legitimize their actions by calling them jihadists.

The American Muslim community and Muslim scholars around the world have repudiated and rejected ISIS’s twisted ideology, calling it not just un-Islamic, but “anti-Islamic.”

The Organization of Islamic Cooperation, the “Muslim U.N.,” said ISIS has “nothing to do with Islam,” and has committed crimes “that cannot be tolerated.”

Along with denying ISIS religious legitimacy and severing its links to revered Islamic symbols and terms, we can deny it a smokescreen for its injustices and stop driving suffering people into its arms by changing our own policies.

There would be no ISIS in Syria if we had fully supported the struggle for freedom in that nation since 2011. It was only the political vacuum created by our lack of support for the mainstream opposition to the brutal Syrian regime, and the resulting slaughter of more than 200,000 people and the displacement of millions more, which gave ISIS space to form and grow.

We need to support the mainstream Syrian political and military opposition seeking freedom and democracy. A free and democratic Syria and region is the long-term guarantee for the defeat and marginalization of groups like ISIS.

We also need to support democracy and human rights in Iraq, Egypt, and throughout the region. The fanaticism and barbarism of ISIS and other terror groups is fueled by the brutal repression of dictatorships that are sadly often supported by the United States. Religious fanaticism and political oppression are mirror images of each other and lead to the same bloody results.

ISIS was only able to penetrate Iraq because we for too long backed a government that completely marginalized the Sunni Muslims and other ethnic and religious minorities. Iraqis who faced being shot at a government checkpoint for being a member of the “wrong” sect found out too late that ISIS was a worse alternative.

If we want to stop ISIS, we must deny it any claim to represent Islam and starve it of the fuel of injustice.

It is up to our political leaders to take the lead through a comprehensive international strategy, not in the number of bombs that can be dropped, but in the establishment of the freedom and justice that will spell the end for ISIS and its ilk.​ 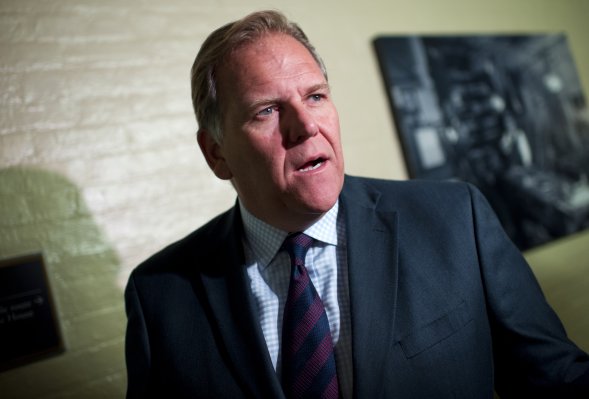 Chairman Mike Rogers: We Will Have to Risk American Lives to Defeat ISIS
Next Up: Editor's Pick