U.S. Secretary of State John Kerry got diplomats from 10 countries at a NATO summit to agree Friday to join forces to fight an Islamic militant group that has seized territory across Syria and Iraq.

Seated alongside U.S. Defense Secretary Chuck Hagel, Kerry pressed representatives from the UK, France, Australia, Germany, Canada, Turkey, Italy, Poland and Denmark to lend military and financial support the fight against the Islamic State of Greater Iraq and Syria (ISIS). The NATO allies agreed to support anti-ISIS forces in Iraq and Syria via supplies and air support, according to a joint statement statement from Kerry and Hagel.

“This morning we had a meeting with some of our key allies and partners on the serious threat that [ISIS] poses to Iraq, the entire region, and the international community,” reads the statement. “We and the Ministers agreed here today that there is no time to waste in building a broad international coalition to degrade and, ultimately, to destroy the threat posed by [ISIS].”

Kerry’s call to arms echoed an op-ed the Secretary of State published last week, in which he called on the global community to unite against ISIS. U.S. airstrikes launched against the group have played a key role in allowing Kurdish and Iraqi forces to stall and push back against the militants’ advance.

“We have the technology, we have the know-how,” Kerry said. “What we need is obviously the willpower to make sure that we are steady and stay at this.”

Kerry said the countries present at the NATO summit need to form a coalition and come up with a plan by the time the United Nations Security Council convenes in two weeks.

“We need to have this coalesce,” he said. 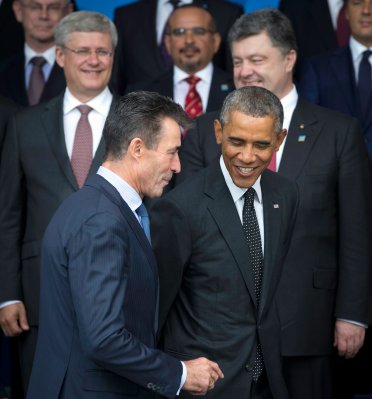 NATO Chief: Alliance Would Consider Intervention in Iraq
Next Up: Editor's Pick