REVIEW: Wetlands: A Schmutzy Comedy With an Adorable New Star

“I’m not into tidiness,” says Helen Memel (Carla Juri) in a spectacular understatement. An 18-year-old with chronic hemorrhoids, she has turned herself “into a living pussy-hygiene experiment,” visiting public urinals to sit on filthy toilet seats — “and I’ve never even had a yeast infection.” She doesn’t often wash down there, so that she “emits a lightly bewitching odor… because we’re all animals looking to mate with each other.” The American Pie boy was a timid novice compared with her. She raids her mom’s refrigerator to determine which vegetables provide the deepest erotic satisfaction. Her notebook reads, “Cucumber: O.K. Ginger: Sucks. Carrot: Bingo!”

Hi, dear squeamish reader. Still with us? If so, stick around, because Helen’s story, Wetlands, makes for the year’s most outrageously vivacious movie. What begins as shock treatment for adventurous audiences quickly becomes a successful seduction. Director David Wnendt’s German comedy, from Charlotte Roche’s wildly popular and scandalous 2008 novel, registers less as an instruction manual in the anatomical and scatological — though it surely is that — than as a jazzy romp about a teenager who joyously expresses every anarchic impulse. And in Juri, it presents to the world an impishly incandescent actress with star quality in spades. She makes Helen’s personal provocations both amusing and endearing, with a bit of poignancy for spice.

Helen’s bodily rebellion may be a reaction to her engineer father (Axel Milberg), who isn’t often around, and her stern mother (Meret Becker), who counsels fastidiousness of the groin area and unyielding self-reliance. When Helen was eight, Mother encouraged the child to jump from a high wall into her arms only to let her daughter fall to the pavement. Mom’s moral: “Don’t trust anybody, not even your parents. Better a scraped knee now than a broken heart later.” Helen’s revenge is to trust everybody and let her pubic flora grow wild.

At a hospital stay for — what else? — hemorrhoid surgery, Helen receives visits from her best friend and fellow sexual insurrectionist Corinna (Marlen Kruze) and flirts with a cute male nurse Robin (Christoph Letkowski) by having him photograph her… where else? But her major mission is to bring her divorced parents together again. Their separation is the only thing that could break her resilient heart; their reunion might mend it. In some ways, our La Pasionaria of the nether regions is a sweet little girl with a yearning to restore the nuclear family.

This is the most conventional aspect of Wetlands, most of which is set in the hospital with frequent flashbacks, real or imagined. In the spirit of Danny Boyle’s Trainspotting, Wnendt employs a comic-surreal style to turn a rambunctious, possibly deranged teenager into an appealing figure. The film’s very first closeup is a tease: what looks like a butt crack is really Helen’s calf pressed against her thigh as she prepares to go skateboarding across Berlin. Later, the camera zooms into a hair follicle for a microscopic view, à la Neil DeGrasse Tyson’s tartigrades on Cosmos, of tiny animated snapping creatures. Split screens and underwater hallucinations keep the verve content high, as does the spectacle of four men applying — in slo-mo, to the “Blue Danube Waltz” — an unusual viscous topping to a pizza. Most of the transgressive naughtiness is hinted at, not shown clinically. Wnendt leaves it to your mind to fill in the dirty pictures.

The director’s signal coup was in casting Juri for the lead role, as Boyle’s had been in choosing Ewan McGregor. (Wnendt’s previous film, Combat Girls, managed to win sympathy for its racially prejudiced protagonist with the casting of Alina Levshin.) Juri, a 29-year-old Swiss actress, radiates a perky intelligence — she bears a startling resemblance to Kay Kendall, the elegant English comedienne of the ’50s — and carries the movie with her fearless instincts, infectious smile and, when the plot calls for them, plangent tears. Even if Wetlands were far less entertaining, it would still be a calling card for Juri’s star-is-born performance. The beguiled viewer watches her and thinks, “Bingo!” 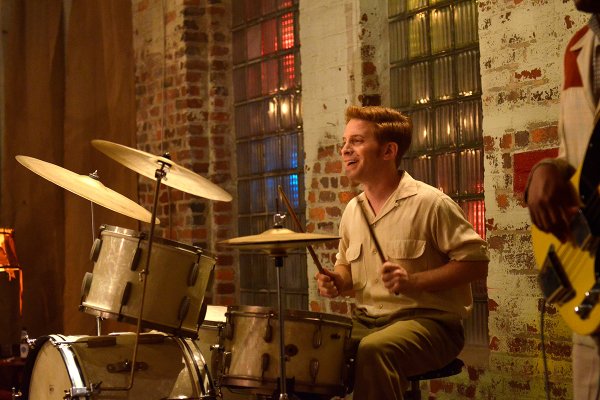 Seth Green: The Identical Is Not a Movie About Elvis
Next Up: Editor's Pick