The New York City crowd wanted this one badly. When Roger Federer hit a ball into the net, fans shut their eyes, as if witnessing a wreck. When he won a big point, they high-fived their friends like frat boys. Federer is aging, and his most sublime tennis is behind him. And this could be his last chance to win one more U.S. Open; it would be his first since his winning five straight championships, from 2004 through 2008.

These fans left Arthur Ashe Stadium enthralled. Federer came from two sets down, and staved off two match points in the fourth, to beat surging Frenchman Gael Monfils 4-6, 3-6, 6-4, 7-5, 6-2 on Thursday night at the U.S. Open. Monfils, wearing matching neon green shirts and sneakers, was enjoying the defining run of his career. He was two points away from his first U.S. Open semifinal. But he couldn’t close out Federer, donned in his black evening wear. Not that Monfils should rue it too long. Roger, it turns out, can still be Roger.

In the first two sets, the mishits weren’t typical Federer. He had 13 unforced errors in each of the first two sets, but settled down in the third, where he committed just a single unnecessary mistake. The fourth set produced the drama. Federer broke Monfils first, to go up 2-1. But after Monfils broke right back, he screamed like a madman before starting the next service game. Federer switched rackets, perhaps to stall Monfils’ fury. When Monfils held serve with an ace, he screamed some more.

Monfils had two match points at 5-4, with Federer on serve. “When guys wish you good luck before the match,” Federer says, “that’s when you hope it kicks in.”

After Federer fought off the match points, the stadium gave him an extended ovation. “I must say tonight was actually quite emotional for me,” Federer says. “I really thought the crowds were incredible. They definitely got me through the match.” In the next game, Monfils double faulted twice, giving Federer a break. Monfils is famous for losing focus; he was right on script. Federer then closed out the set; the crowd screamed some more.

In the fifth, Monfils botched a return, giving Federer a 2-0 lead. He slumped his shoulders; his body language said the match was over. Federer ended the deciding set in just 27 minutes. Monfils said he tried to keep his emotions in check. But the mental effort left him fatigued.

“Roger just jumped on me,” says Monfils. “He changes so many times. He starts with chipping very well. I think I handed it good. So then he sticks with longer points. It was 50-50, and then he tries to come to the net very often. It was a bit better for him. Then suddenly he starts to mix everything.

“You know, that’s why he’s the greatest player. Because he can do everything.”

A rematch of this year’s Wimbledon final — Federer-Djokovic — looks likely. Federer will face Marin Cilic, from Croatia, in one semi; Novak Djokovic will play Kei Nishikori, of Japan, in the other. CBS will broadcast its last men’s final on Monday. Since 1968, the network has broadcast the Open; ESPN takes everything over next year.

If Cilic-Nishikori is CBS’s last U.S. Open match, execs will wail. The New York fans will wail even louder. 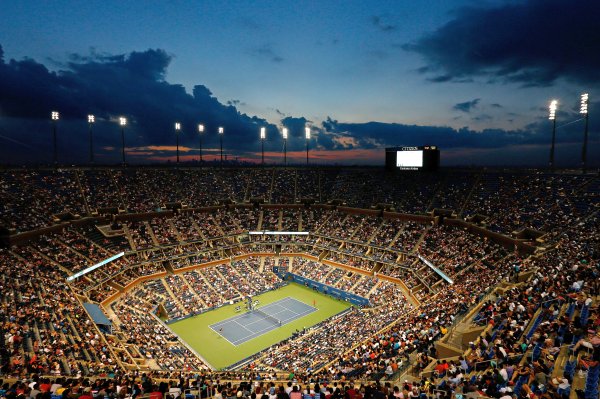 American Weakness Is Glaring at the U.S Open
Next Up: Editor's Pick