Acer’s Chromebook 13 is arguably the best Chromebook for the money right now.

For $300, you get a 13-inch high-resolution screen — it’s 1080p in a sea of Chromebooks with 720p screens — and battery life that can hit 10 hours before needing to be recharged. Those are the two biggest selling points.

Battery life is real-deal here. I’ve been using the Chromebook 13 off and on as a secondary machine for the past week and have recharged it twice. I even took it with me on a four-day weekend and left the charger at home. The feeling was equal parts exhilarating and anxious, like riding an edible roller coaster made largely of ice cream sandwiches. If you’re doing basic stuff, you’ll probably be able to squeeze 10 hours out of this thing. If you’re hammering on it, expect about eight. Acer promises up to 11 hours, so hitting anywhere in the 8-10 range is pretty good.

The 1920×1080 screen is uncommon in a $300 machine and it’s a big selling point on its own, but don’t expect to be blown away. Viewing angles leave a bit to be desired and the matte panel — though pretty good outdoors — makes everything look somewhat lifeless. I kept wanting the screen to be great, but that burning desire kept getting quietly and fairly snuffed out by the $300 price tag.

What you’re getting from the screen, basically, is more space on the dance floor. Here’s a 72op Chromebook (on the left) up against the Chromebook 13’s 1080p screen:

The trackpad and keyboard are both hits in their own right, too. The trackpad especially: it’s buttery-smooth for two-finger scrolling, rivaling the gold-standard MacBook trackpads. The island keyboard is plenty spacious, with the keys having Goldilocks-like travel: not too shallow, not too deep. Each keypress elicits a satisfying thump.

Under the hood, Acer’s installed a mobile-ish Nvidia Tegra chip, the first of its kind in this type of machine. The promise is great horsepower with minimal tradeoff to the battery. Battery life is a definite win here, though I’d say horsepower merely falls into the “good enough” to “pretty good” range depending what you’re trying to do. Chromebooks are appealing as secondary computers for people who use computers a lot or as basic computers for people who need something for browsing the web. If you’re looking for either of those things with this machine, you won’t be disappointed; if you want to use this as your primary computer and you’re going to load up a bunch of browser tabs, you might want to consider dropping an extra $80 for the next model up — which features double the RAM and double the storage — or spend a bit more for a mid-range PC.

And like any $300 computer, build quality isn’t going to be anything spectacular. The Chromebook 13 is Acer’s most solidly-built and best-looking Chromebook yet, though it’s still ensconced in white, smudge-magnet plastic and there’s a meaningful bezel surrounding the screen. The machine travels light, though, at 3.3 pounds and shares a similar length-and-width profile as a 13-inch MacBook Air, with a thickness of 0.7 inches:

Various quibbles aside, Acer’s Chromebook 13 has it where it counts: long battery, high-resolution screen, great trackpad, great keyboard and a very manageable travel size. The processor holds it back ever so slightly, but the day-long battery life should easily counterbalance that for most people.

Couple quick notes before we wrap up: 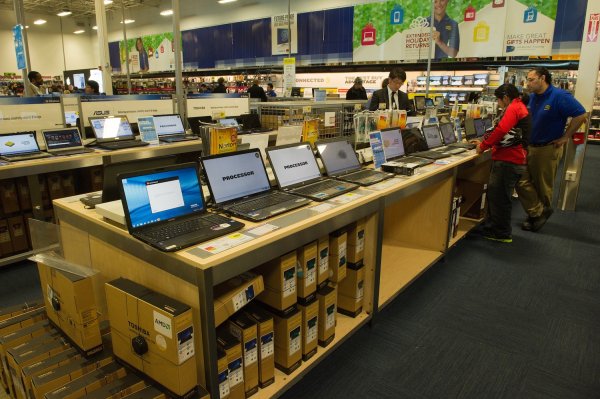 (Not Very) Bold Prediction: $200 Laptops Aplenty for the Holidays
Next Up: Editor's Pick