This undated artist rendering provided by the Carnegie Museum of Natural History shows the Dreadnoughtus.
Mark A. Klingler—Associated Press
By Noah Rayman

A team of researchers said Thursday that they have found a species of dinosaur that was 85 feet long and weighed as much as 12 elephants, making it one of the largest animals known to have walked the Earth.

The team unearthed the fossilized skeleton of the giant herbivore in Argentina’s Patagonia region and say that some 70 percent of the skeleton is represented. They published their findings in Scientific Reports on Thursday, calling it the most complete skeleton of a titanosaur — a group of giant long-necked dinosaurs that existed roughly 75 million years ago — ever found.

Despite the dinosaur’s enormous size, which is nearly as large as the estimated sizes of other, less-complete fossilized titanosaurs, the researchers say this one was likely still growing when it died.

“I look at this dinosaur every day now and I still can’t believe it exists,” researcher Kenneth Lacovara, of Drexel University in Philadelphia, told the Wall Street Journal. The fossils are on loan to the U.S. but are slated to be returned to Argentina next year.

The dinosaur, formally called the Dreadnoughtus schrani, is believed to have weighed 65 tons, well above the weight of a Boeing 737-900 and nearly 10 times the weight of a T. rex, the Journal notes. Its neck was 37 feet long and its tail extended another 29 feet.

“We are seeing something that is pushing the envelope of how big you can get on this planet,” Lacovara told the Journal. 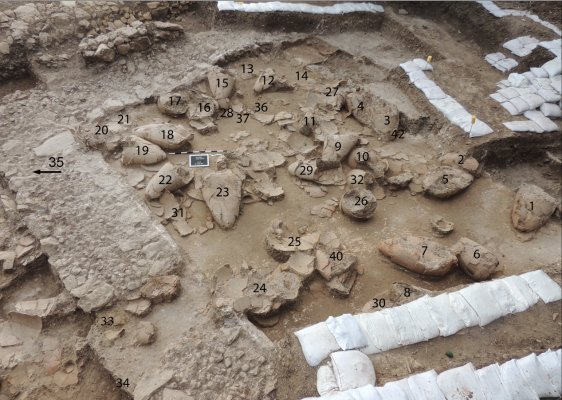 What Bronze Age Wine Snobs Drank
Next Up: Editor's Pick