Hands On: Ollie Is an Acrobatic Mini-Robot Designed for Speed

A little over a year ago, my former colleague Harry McCracken wrote about Sphero, a nimble robotic orb you could bowl around a room like a remote-controlled plastic baseball using a smartphone or tablet.

Colorado-based Sphero (nee Orbotix), the futuristic gizmo-maker that came up with the eponymous Sphero robotic ball, is about to release its next big thing: another remote-controlled robot-toy, only one designed to zip around play-spaces three times faster.

You wouldn’t guess as much looking at it. Take one of those miniature soda cans you sometimes get on airplanes, paint it white and turn it on its side, then strap a pair of rubber rings around the ends like caterpillar track (the obvious analogy being something tank-like, and no one’s ever described a tank as “fleet”). Instead of aluminum, make the frame polycarbonate (a type of highly durable plastic), and instead of carbonated liquid, fill it with the gyroscopic innards of a gymnastic robot.

Do all that (and stylize the sides with a stack of tiny LED rectangles, and paint the tread deep sky blue) and you wind up with something that’s a little less versatile and elementally durable than Sphero, but a whole lot faster.

Sphero calls it Ollie, like the trick you can do with a skateboard or snowboard where you jump into the air without ramping off something else. Ollie can pull off ollies, do a quick spin in place, spin in place indefinitely, speed boost while driving (called “grabs”), jump around like a hot potato, pull off wheelies, or rocket across the room and turn on a dime before zipping off in a new direction. Ollie is available today for iOS and Android devices from gosphero.com for $99, with plans to sell the toy in stores starting September 15.

I’ve been playing with Ollie for about a week, putting the tubular robot through its paces in a largish room with a wood floor and a few plush rugs (both of which it navigated with ease). Unlike Sphero, which came with an inductive charging base, you have to plug Ollie into a USB outlet to charge, and its built-in battery takes about three hours to fill while returning about an hour of playtime. It’s a snap to turn on or off: just tap your mobile device (running the control app) against the toy and it connects, illuminating Ollie’s LED rectangles. You turn Ollie off by closing the app.

There’s some minor assembly required, but it’s pretty basic. Out of the box you get Ollie itself, a pair of optional “hubcaps” and two rubber “tires.” Ollie works with or without the tires (drifting’s easier with them off, hitting top speeds is easier with them on), and like Sphero, the company plans to sell a line of upgrades starting at $10 each, most of them tire-related and designed to let you tweak whether your Ollie is grip- or speed-oriented. Sphero sent along a small ramp made by Tech Deck, though it looks like the one the company is planning to sell as an official accessory–something called “Terrain Park” with ramps at either end of connector rails–is a totally different product.

Also like Sphero, Ollie seems like a product that–as Harry said of the former in his hands-on–“runs the risk of being something you love for half an afternoon and then stick in the back of a drawer forever.” I’d say it’s even more of a risk with Ollie. Though it can travel a lot faster than Sphero (up to 14 m.p.h. versus Sphero’s comparably poky 4.5 m.p.h.), it ships with just a handful of activities compared with Sphero’s 30-plus.

Once you exhaust Ollie’s velocity-related possibilities over the course of that half-afternoon (one of those possibilities including, in my case, unintentionally freaking out our Sheltie), you’re left with the tricks, which you access through a free control app pulled down from Apple’s App Store or Google Play. The app’s also where you can fiddle sliders to set top speed, finesse handling and acceleration, or optimize for hard or soft surfaces.

In Sphero’s case, the control app included a slew of augmented reality exercises, games and programmable macros. In Ollie’s case, all you get are some light gymnastics: a few spins and mundane tricks. Flip the phone sideways and the interface shifts from a virtual motion control joystick to a square grid beside the virtual joystick that lets you swipe to trigger a few trick maneuvers, rewarding deftly executed ones with little messages like “sick spin” or “intergalactic steam roll bit flip.” But we’re talking a handful. Put Ollie in the hands of a child creatively laying down makeshift obstacles and the possibilities grow, but out of the box, Ollie feels even more niche than Sphero.

Speaking of kids, Ollie seems pretty durable for a toy that, unlike Sphero, has exposed moving parts. My two-year-old had no compunctions about chasing Ollie down, snatching it up, then giving it an emphatic toss (Ollie didn’t seem to mind). While I’m pretty sure Ollie’s not meant to be an aerial projectile, I can vouch for the toy’s ability to survive several drops from heights of about two feet onto a hardwood floor without breaking or malfunctioning. (I can’t say the same for the floor, which picked up a few dings in the process.) Also, if you’re thinking about using Ollie outside, be aware that where the company bills Sphero as waterproof as well as “pet-proof,” Sphero quips that Ollie “outruns pets and hates water.”

Questions of demographic appeal aside, I do have a minor quibble with the control scheme. Sphero’s app turns your mobile device’s touchscreen into a kind of pancaked joystick. Ollie gleans directional and velocity input using Bluetooth based on where your thumb or fingers are in relation to a central point on the screen. The good news is that the connection operates lag-free, and Ollie responded to my swipes instantaneously–up to the stated connection range of 30 meters (just under 100 feet).

But the app shares some of the downsides of touchscreen-based control schemes that attempt (and generally fail) to give you precision control of three dimensions using only two. If you’ve played tablet or smartphone ports of 3D games made for actual 3D gamepads, you know what I’m talking about: a tendency to lose your place in the touch area when things get frantic, since there’s nothing to physically limit or “bound” your fingers on a touchscreen.

In Ollie’s case, the problem manifests less as directional control–it’s easy enough to gauge whether your thumb’s at three- or nine-o-clock without looking down at the screen–than picking the toy’s velocity. Since Ollie can move at such high speeds, you have to make course corrections far more often. So your eyes have to be on Ollie all the time, making it easy to lose your place in the app’s radius-related speed controls.

Don’t get me wrong: I like Ollie well enough, and my two-year-old now routinely asks for it by name. I can also imagine an older child coming up with some pretty sophisticated play scenarios, say devising a makeshift obstacle course using ordinary household objects or toys and working hand-eye coordination skills as well as design ones. I just wish Sphero could have come up with more for the toy to do out of the box on the app side.

The company says it’s planning to release a few more apps down the road, including one that’ll let you draw paths on the touchscreen that Ollie follows as well as others that’ll let programmers goof around. But I can’t speak to those because they aren’t yet available.

Getting Ollie racing along at top speeds certainly has its satisfactions (exhausting an energetic toddler being one of them), but Ollie needs more in its arsenal to make it, like Sphero, about more than the novelty of remote-controlling a movable toy with your mobile device. 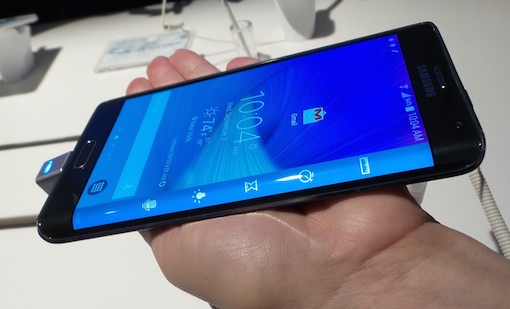 Hands On: Samsung Galaxy Note 4 and Note Edge
Next Up: Editor's Pick