Joan Rivers hated being labeled a pioneer: she thought it made her sound old and irrelevant. “It upsets me to say I’m a pioneer because I’m so current now, you know?” she told PBS in 2012. “I don’t like when the ladies come up and say, ‘Oh, you broke barriers for women.’ And I say, ‘I’m still breaking barriers.'” Rivers worked almost up until her death on Thursday at age 81. She took every job she could get so that fans and industry insiders alike knew that she was no starlet of yesteryear; she was still searching for the next frontier.

Rivers isn’t the only one to bristle at the idea that she’s an icon of progress for women. The comic quickly made an enemy of the feminist movement by picking on other celebrities for the way they looked, how much they weighed or their sex lives. She was infamous for diving into inflammatory subjects lambasting everyone in her path. But she often positioned herself as the butt of the joke too: she quipped about her penchant for plastic surgery and even her husband’s suicide. Nothing was off-limits as Rivers wise-cracked her way to the top.

And it was this undisguised and “unladylike” desire for success that made Rivers a feminist icon. As revealed in the recent documentary about her life, Joan Rivers: A Piece of Work, Rivers had an incredible work ethic, packing her schedule with standup shows in addition to her E! show Fashion Police and red carpet gigs. She famously hated an empty calendar. Each decision she made—even if it was at the expense of others—was in the pursuit of personal empowerment.

Rivers blazed trails for other women in the comedic industry by bringing taboo topics like abortion to light onstage. Without her, there would be no Sarah Silverman or Chelsea Handler or Amy Schumer. Here are just a few of Joan Rivers’ first:

Though Rivers—especially as she aged—let jokes about her looks roll off her back, she says she was the first female comedian to refuse to try to be one of the men. The few female comedians working when Rivers began disguised their femininity behind frumpy outfits. Rivers, on the other hand, dressed undeniably like a woman with full hair and makeup. She once quipped, “Women should look good. Work on yourselves. Education? I spit on education. No man is ever going to put his hand up your dress looking for a library card.”

Some women resented Rivers’ obsession with looks and her conviction that women must present themselves as beautiful. But she opened new doors for women comics who can now decide to dress however they want during a set. “I don’t think there’d be a Tina Fey now if I hadn’t tried to look good in the beginning,” she told NPR in 2010.

Rivers made it clear she didn’t do this for her fellow female comedians but in order to distinguish herself and her own career. “But I think of opening doors not just for women comedians — I never think about women,” she continued. “I think just [that I’m] always trying to push for myself, push the boundaries [and] make them listen. Make them listen to the truth and laugh about it.”

Joan Rivers was perhaps the first comedian to joke about abortions. In one of her bits, she spoke about how friends of hers would leave the country to have “appendectomies” when everyone really knew it was an abortion. “And by making jokes about it, you brought it into a position where you could look at it and deal with it. It was no longer something that you couldn’t discuss and had to whisper about,” she told NPR. “When you whisper about something, it’s too big and you can’t get it under control and take control of it.”

Joking About Being Gay

Abortion wasn’t the only secretive subject that Rivers brought to light: the comedian also joked about being gay at a time when even talking about homosexuality was revolutionary. “My original record, not even a CD, that I played for my daughter, which was called Mr. Phyllis & Other Funny Stories—Mr. Phyllis was my hairdresser, and that was very shocking, that you dared to say your hairdresser was gay,” she told the A.V. Club in 2010, referring to the comedy album she put out in 1965. “I know it sounds so stupid.”

She Didn’t Need to Be Liked

Rivers withstood a lot of criticism throughout her career. In doing so, she demonstrated that women don’t always have to be appealing and likeable. “When people hate me, that’s good,” she told the A.V. Club. “They know I’m there. You’re not a chorus kid. Remember in A Chorus Line, she’s having trouble and he keeps saying, ‘You’re standing out,’ and she’s trying not to? They hate me? That’s good.” 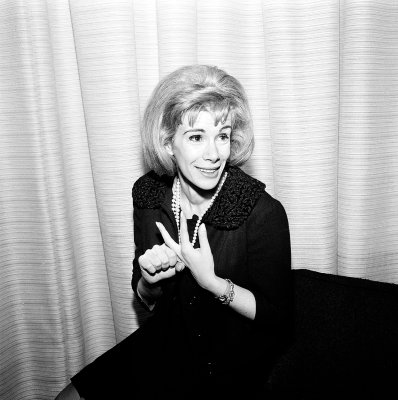 Joan Rivers Joked About Death — Along With Everything Else
Next Up: Editor's Pick