Will Netflix become the new mixtape?
Photo Illustration by Mia Tramz for TIME
By Denver Nicks

If you have a pulse and an Internet connection you have some idea of how much information companies can learn about you from your online activity. It seems the longer I go without cleaning my apartment the more ads I see for housecleaning services. These days, just watching a diaper ad crawl across the screen is a surefire way to give me petrified-deer-in-headlights face.

Netflix seems to work by the same sorcery—among my Top Pics right now is a Burning Man documentary, for instance, but could they possibly know I just returned from my first-ever Burn? Also in my Top Pics is Lars von Trier’s Nymphomaniac: Volume 2, and I don’t even remember watching volume 1, so….

Anyway, the point is that Netflix’s new social media sharing initiative/attempt to insinuate itself into more of my life is a little worrisome.

The video streaming service revealed Tuesday that they are introducing a new “recommendation feature” in its Facebook app. Per the video accompanying the announcement, the feature lets you share your choices with people you know after you’ve seen a great show or movie. It’s “a great way to keep you and your friends talking about the shows you love,” says Netflix.

That’s a sweet sentiment, but I’m not certain I want my friends talking about the shows I love.Will everyone be disappointed by how often I don’t watch even a remotely challenging documentary? Will the guys be disturbed by the frequency with which I watch Parenthood? Will theoretical physicists be flummoxed by the unfathomably massive quantity of hours I have devoted to (re)watching It’s Always Sunny in Philadelphia and 30 Rock while holding down a full time job?

The company promises it won’t broadcast your choices to all your friends’ feeds and that recommendations only go to specific friends to whom you choose to send them. That being the case, we can table for a moment privacy concerns (we’ve still got an eye on you, so stay cool, Netflix) and turn to more interesting possibilities. In fact, I think Netflix may have just turned itself into a massive library of cultural emojis.

Netflix says the recommendation feature activates after you’ve watched a show. So the obvious question then is how close do you have to get to finishing something before you can start recommending your boss check out that amazing documentary about how Google’s office environment with delicious free food and ping pong tables and whatnot is so conducive to creativity? Or, can you watch just five minutes of a PBS special about protest movements and before sending it to that special someone who is really into social justice?

Other recommendation quandaries will certainly arise:

Should you hint to an unfaithful lover that you’re on to them by sending I Know What You Did Last Summer?

As Fantasy Football season kicks into gear, should you expect to see not so subtle smack-talk hit your Facebook account in the form of specific episodes of The League?

Is sending out a mass all-your-cards-on-the-table recommendation that your hottest Facebook friends watch 9 1/2 Weeks too obvious? (And furthermore, will your Facebook friends see that you’ve recommended the same flicks to others too?)

I can see all this movie recommending sending us into fits of hyper-overanalysis. Trust me, if you’re a perennial Ph.D. candidate no one is going to be able to recommend you watch The Graduate without setting off a whole cascading series of questions (especially if the recommendation comes from a middle aged friend of your parents’, in which case you’ll be grappling with a whole separate set of questions).

Netflix recommendations could become the new mixtape. (Or mixspotifylist? What do kids use now?) It’ll be most interesting to see what the teenagers do with this new feature. When it comes to social media the kids these days are in…. 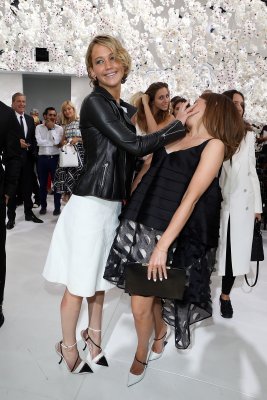 Jennifer Lawrence Is the Highest-Grossing Action Heroine
Next Up: Editor's Pick