Gael Monfils Is the Most Interesting Guy in Tennis

Gael Monfils of France returns a shot against Grigor Dimitrov of Bulgaria in their men's singles fourth round match on Day Nine of the 2014 US Open at the USTA Billie Jean King National Tennis Center on September 2, 2014 in Queens.
Mike Stobe—USTA/Getty Images
By Bill Saporito

During the first week of the U.S. Open, I made a point of getting out to Flushing Meadow to watch Gael Monfils play. It’s almost become an annual event for me. And Monfils was once again his entertaining self. There are better players in men’s tennis, to wit, five-time U.S. Open winner Roger Federer, the No. 2 seed who will face Monfils, seeded 20th, in the quarterfinals. But nobody is more fun to watch than this Frenchman, because nobody can combine such pure athleticism with the insouciance bordering on disdain he brings to the game. When I bumped into a USTA staffer I know and told him I’d gone to watch Monfils, there was a shake of the head. “Was he moping around again?” was the question.

Only if moping around means dancing deep across the backcourt and whacking everything he reaches — and he just about reaches everything, with a combination of power and dexterity that his fellow pros openly admire. The 6-ft. 4-in Monfils is a rare combination of pointillist and power—Seurat mounted on coiled springs. In his second round match against Alejandro Gonzalez, Monfils won game two of the second set with a leaping, crosscourt forehand from the right baseline corner that was clocked at 105 mph. Think of Johnny Manziel trying to throw an accurate 75-yard jump pass across his body. Monfils applauded his own work by twirling his index finger as if to say, “oui, that’s me.” Up 3-0 in the third set, he won the fourth game by running down a Gonzalez shot into the corner and hitting a paintbrush backhand down the line that had his opponent shaking his head at the incredible touch on display. Oh, and a decent 130 m.p.h. serve.

Monfils also has the temperament of an artist. He seems like he’s not always paying attention to things like winning. His changeover routine is to mumble while looking over the crowd and to sip from a can of Coke once he’s seated. C’est la vie, eh?

“For me, tennis is a sport, you know. It’s not a job, it’s a sport,” he said in a post-match interview Tuesday, having dispatched rising star Grigor Dimitrov 7-5, 7-6, 7-5 to reach the quarters. He gave a couple of points away to Dimitrov, just because. “Sometime if I’m fed up with that, just leave it. For me, I don’t know if it’s bad to say it and for sure I will use like bad words in English, but it’s like, you know, don’t give a sheet.”

Rare among top pros, Monfils plays without a coach, meaning his strategy seems to be to do whatever. And fellow pros have criticized his game as too laid back when, given his height and speed, he should be attacking more. The don’t-give-a-sheet strategy has generally been good enough to get Monfils deep into Grand Slam tournaments, but never deep enough to win one. His best result: the semis at the French. But finding a coach that fits him hasn’t been easy, he says: “That person has to be — has to be, for me, like good, first of all, but has to be hard and also understand my personality. Because I don’t think I’m easy, but I think I’m quite a good worker.”

Monfils will have to be quite a good worker indeed to beat Federer, who is again looking like the flawless stroke machine that earned 17 major titles. Federer has beaten Monfils three times at Roland Garros, and more recently at the Western & Southern Open in Cincinnati, but lost to him at the ATP Masters in Shanghai last year. Monfils says he is definitely looking forward to the match. Maybe he’ll win, if he gets a little lucky. Maybe not.

“It’s always great,” Monfils said, “because no matter what, I will say to my children, I played against him. Even [if] I kill him, you know. And this is cool.” 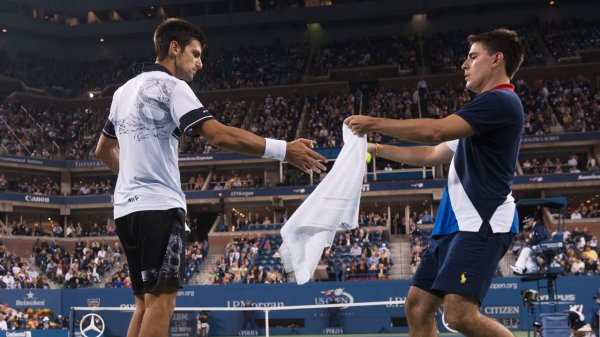 Being a U.S. Open Ball Person
Next Up: Editor's Pick