Why Arming Ukraine Would Only Make Matters Worse

The arguments for sending weapons to Ukraine have felt convincing in part because their premises are true. Ukraine’s military has fallen back. The separatist rebels have advanced. The Russian military’s role in the conflict has become so overt that calling it anything other than an invasion has come to look like willful ignorance. The West and its leaders do look weak and feckless, as their sanctions against Russia have failed to make President Vladimir Putin back down. So there is an understandable urge in the West to grasp at something bolder, more proactive. Why not send the Ukrainians enough weapons to level the battlefield?

This solution has found some influential champions over the past week, just as the NATO alliance gathers in Wales to forge a response to the Ukrainian crisis. Wesley Clark, the retired American general who commanded NATO forces in Europe during their bombing of Yugoslavia in 1999, argued over the weekend that, along with diplomacy and sanctions, NATO must give Ukraine “the military means to defeat Russia’s new war strategy.” Robert Menendez, the chairman of the Senate foreign relations committee, said during a trip to Ukraine on Sunday that, “We have to give the Ukrainians the fighting chance to defend themselves.” In the opinion pages of the New York Times, a recent headline urged the West to “arm Ukraine or surrender.”

But arming Ukraine does not seem like much of a strategy. It may do some good in assuaging the West’s wounded pride, but it would hardly help Ukraine find a way out of this war. The setbacks it has faced in the last two weeks have shown that the most plausible solution is through the peace talks that began, at Putin’s insistence, on Monday in the capital of Belarus. Instead of demanding full secession from Ukraine, as the rebel leaders had previously done, they came to the table asking for various forms of autonomy. Among the finer points of such an arrangement there does appear to be room for a deal, and Putin has signaled his willingness to accept one. On Wednesday he called on the rebel militias to “stop advancing” to allow the negotiations to proceed.

It is not clear what kind of compromise either side would be willing to accept. Russia wants the separatists to have enough political influence to stymie Ukraine’s integration with the West for many years to come. Ukraine, for its part, would likely draw the line at giving rebels the right to shape their economic ties with Moscow. Either outcome would be abhorrent to many Ukrainians, and with parliamentary elections scheduled for the end of next month, President Petro Poroshenko will face growing pressure to abandon the talks and resume the fighting.

The flow of Western military aid would likely make that a lot more tempting. If the negotiations stall – or prove too humiliating for Poroshenko – he may feel compelled to try his luck on the battlefield once more. Equipped with an arsenal of NATO-grade kit, Ukraine’s forces could again march on the separatist holdouts in the east, hoping to surround them and lay siege to their cities.

That is roughly where the conflict stood about two weeks ago – when the death toll in this war had already topped 2,000 – and Poroshenko had his best chance to begin negotiations on his own terms. His military had at that point taken back control of more than half of the rebel-held territory and encircled their remaining strongholds. But instead of halting the advance and initiating talks from a position of strength, Poroshenko attempted to clear out the rebels by force. Putin then made his reaction clear, says Simon Saradzhyan, a Russia expert at Harvard University’s Belfer Center. “He will not stand by and let the separatists be defeated.”

When Ukraine’s armed forces seemed at the verge of victory last month, both NATO and Kiev observed that the usual flow of Russian arms across the border turned into a surge of regular Russian troops, more than a 1000 of them, who quickly reversed the Ukrainian advance. This was a paradigm shift in the war. It showed for the first time that Putin is prepared to sacrifice his soldiers in order to keep the separatist cause alive.

There isn’t much reason to believe he would act differently in the future. If Ukraine’s forces were equipped with Western arms, it might in fact be easier for Putin to justify a broader offensive against them. His narrative at home would no longer be about the “fascist” Ukrainian military and the beleaguered freedom fighters dying for their right to speak the Russian language. It would be about Western weapons slaughtering the ethnic Russians of eastern Ukraine. That picture on Kremlin-owned TV would incite enough outrage against the West in Russia to subdue public resistance to the use of Russian troops.

In a phone call with the European Commission President Jose Manuel Barroso this week, the Russian President warned that he could, if he wanted, “take Kiev in two weeks.” With Western arms thrown into the fight, it would probably take him longer. But short-term military aid won’t close the gulf between Russian and Ukrainian firepower. Russia’s defense budget is nearly 50 times greater than Ukraine’s. It has roughly eight times as many fighter jets, warships and active military personnel. And then there is the threat Putin made on Aug. 29: “I want to remind you that Russia is one of the strongest nuclear powers,” he said. “These are not words. This is reality.” 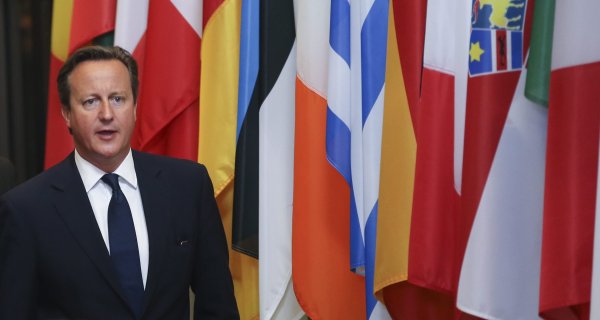 ISIS Video Intensifies Pressure on Britain
Next Up: Editor's Pick