Obama Offers Muddled Message to Europe in Face of Crises

President Barack Obama traveled to Estonia on Wednesday to set the world straight on his intentions. In a speech at the wood-paneled Nordea Concert Hall in Tallinn, he spoke of “steadfast support,” “solemn duty,” “crystal clear” treaties and “concrete commitments.”

The rhetoric hit its marks. The message, however, was muddled.

As he finished his speaking engagements, several questions remained about how he intends to deal with the multiple foreign policy crises facing his administration. He again condemned Russian incursions into Ukraine, and promised new U.S. and European help to train, modernize and strengthen the Ukrainian military. But his “unmistakable message” of support stopped short of defining or ruling out any additional U.S. military role should Russian aggression continue.

While he pointedly promised to defend those countries in the region who are signatories to the North Atlantic Treaty Organization (NATO), Obama offered no similar assurances to Ukraine, even as he highlighted that country’s voluntary contributions to NATO military efforts. Instead, Obama asked for a focus on a peace process that seems, for the moment, elusive.

“Since ultimately there’s no military solution to this crisis, we will continue to support [Ukrainian] President [Petro] Poroshenko’s efforts to achieve peace because, like all independent nations, Ukraine must be free to decide its own destiny,” he said, minutes after the Kremlin denied reports it had reached a ceasefire with Ukraine. As NATO leaders gather to consider imposing additional economic sanctions on Russia, Obama hailed the success of the U.S.-led sanctions regime, which has hurt the Russian economy but without stopping additional Russian military aggression in Ukraine.

This was not the only issue on which he left gray areas. During a news conference earlier in the day, he offered several differing, if not contradictory, descriptions of U.S. goals for handling the threat of the Islamic State of Iraq and Greater Syria (ISIS).

“The bottom line is this,” he said at the start of a press conference. “Our objective is clear and that is to degrade and destroy [ISIS] so it is no longer a threat not just to Iraq but also the region and to the United States.”

But minutes later, he seemed to recast the goal more locally.

“Our objective is to make sure they aren’t an ongoing threat to the region,” he said. “As we’ve seen with al-Qaeda, there are always going to be remnants that can cause havoc of any of these networks, in part because of the nature of terrorist activities. You get a few individuals, and they may be able to carry out a terrorist act.”

Then, in a third formulation, he said he hoped to “shrink [ISIS’s] sphere of influence, its effectiveness, its military capability to the point where it is a manageable problem.”

'We Will Not Be Intimidated'

In place of answers on these most knotty challenges, Obama repeated the idealistic formulations of human progress that have long been his trademark on the international stage.

“The currents of history ebb and flow. But over time, they flow toward freedom,” he said. “Freedom will win, not because it’s inevitable, not because it is ordained, but because these basic human yearnings for dignity and justice and democracy do not go away.” 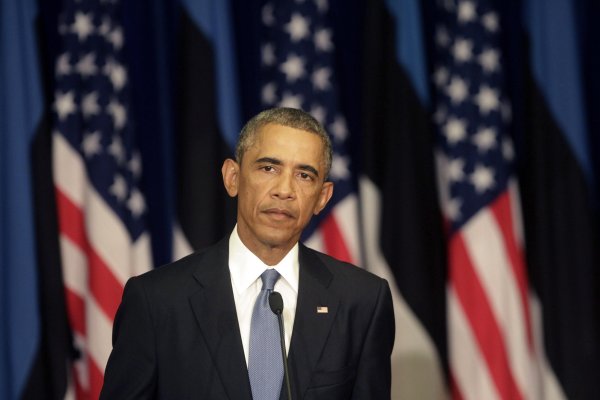