From left: SIM missionary Nancy Writebol and her husband David in an undisclosed location on Aug. 20, 2014.
Reuters
By Alexandra Sifferlin

An American health care worker who recovered from Ebola recounted Wednesday the ordeal of not knowing whether she would survive the trip back to the U.S. after being infected in Liberia.

Nancy Writebol, one of the health care workers who was successfully treated at Emory University Hospital, recalled during a news conference that, as she was flying from Liberia back home, a doctor on the flight approached her in his protective gear, held her face, and said: “Nancy you’re going home, and we will take very good care of you.”

“I watched as people were by themselves, not able to have a family member near them, not being able to feel the touch of another person,” Writebol said of her time battling the Ebola outbreak that has now killed more than 1,500 people in West Africa.

Another doctor from the aid group for which Writebol worked, SIM USA, was also infected, the group’s director acknowledged Wednesday, identifying the patient as Dr. Rick Sacra, 51, of Massachusetts. Sacra was the medical director for a hospital in Liberia, and had gone to the country after Writebol and Dr. Kent Brantly, another infected American who recovered, were evacuated. SIM USA said it’s focused on Sacra’s treatment in Liberia and didn’t say whether he will also be brought back to the U.S.

When asked what healed her, Writebol—whose husband stood by her side—credited a combination of her treatment in both Liberia and the U.S., the experimental drug ZMapp, and her faith. 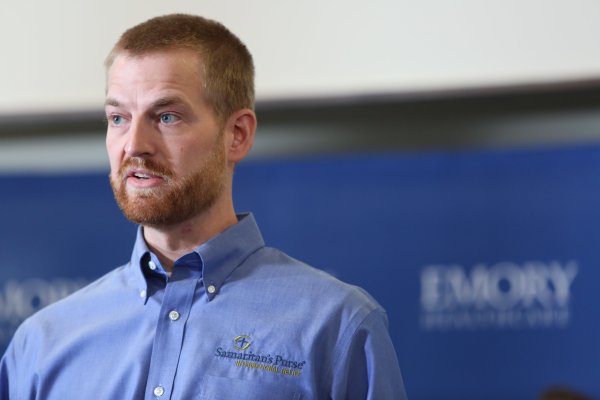