Why the U.S. Won’t Buckle Under ISIS Pressure

Kurdish fighters inspect an ISIS vehicle, bearing a jihadist flag, after it was hit by a U.S. air strike in northern Iraq last month.
Ahmad Al-Rubaye—AFP/Getty Images
By Mark Thompson

In the clash between Islamic militants and the West, Steven J. Sotloff was an innocent player caught in the wrong place at the wrong time. But the shock of Sotloff’s murder, announced Tuesday in a video released by the Islamic State of Iraq and Syria (ISIS), only serves to highlight the weakness of those who killed him.

It’s a classic case of what the Pentagon calls asymmetric warfare—where one side in the fight is so outgunned that it resorts to unorthodox—and sometimes inhuman—tactics to try to even the odds, scrambling the rules of war that have guided nations for centuries.

Over the past month, the U.S. military has launched more than 100 air strikes against ISIS targets in northern Iraq. While U.S. officials have publicly justified the attacks on humanitarian grounds—as well as protecting U.S. interests—they also have obliterated dozens of ISIS vehicles and checkpoints, and those manning them.

There is no way ISIS can counter U.S. air strikes. It has no air force and apparently has few, if any, anti-aircraft weapons. Its ground forces, once identified, are easy targets for American laser- and GPS-guided bombs and missiles.

Unable to thwart the attacks, ISIS has tried to derail them by murdering a pair of journalists it was holding in captivity. The first, James Foley, a freelance reporter for the GlobalPost website, was allegedly killed by a black-clad man speaking with an English accent in a video released Aug. 19. ISIS released a second video 14 days later, purportedly showing the same man murdering Sotloff, who had freelanced for Time.

War, at least between states, is guided by international law, which prohibits intentionally killing innocent civilians. But non-state actors have long been willing to resort to terrorism and murder to make their points. The masked man who killed Sotloff used a knife, but the video was the real weapon—a broadcast attempt to overcome impotence on the battlefield. “I’m back, Obama, and I’m back because of your arrogant foreign policy towards the Islamic State, because of your insistence on continuing your bombings and in Amerli, Zumar and the Mosul Dam, despite our serious warnings,” the man said.

Because ISIS can’t stop the bombing by matching U.S. weaponry, it is trying to stop it by horrifying the American public in hopes they will compel President Obama to stop. That hope shows how little ISIS understands the American body politic: there is no indication the killings have put political pressure on Obama to slow his attacks on ISIS—if anything, the killings have increased support for the bombings.

Speaking to reporters in Estonia on Wednesday, Obama said, “Whatever these murderers think they’ll achieve by killing innocent Americans like Steven, they have already failed. They have failed because, like people around the world, Americans are repulsed by their barbarism. We will not be intimidated. Their horrific acts only unite us as a country and stiffen our resolve to take the fight against these terrorists.”

That said, horror isn’t the only way to win an asymmetric war: sometimes the points non-state actors want to make are as much political as military, and through their patience and resolve they can prevail over stronger foes.

“We’ve been going after terrorist networks in that part of the world for more than a decade, with very good success,” Rear Admiral John Kirby, the Pentagon spokesman, said Tuesday. “The real measure of success is that their ideology is ultimately defeated, and the only way that’s going to be done is through good governance. And we’ve said that time and again, but I think it’s worth repeating. There’s not going to be a military solution to this.”

But there too ISIS is showing weakness. Its rampaging militants have stormed towns and cities across much of Syria and Iraq, slaughtering civilians as they go and imposing the harshest form of religious law on territory they control. In more than a few places, the U.S. military intervention has not only hurt ISIS it has won support from their beleaguered victims.

In the latest recorded murder, the man threatened to kill another captive if the American bombings continue. “Just as your missiles continue to strike our people, our knife will continue to strike the necks of your people,” the man said. But ISIS is beginning to run out of hostages. The U.S. will never run out of missiles. And if ISIS continues its brutal tactics on the ground in Iraq, soon enough it will run out of local supporters, too. 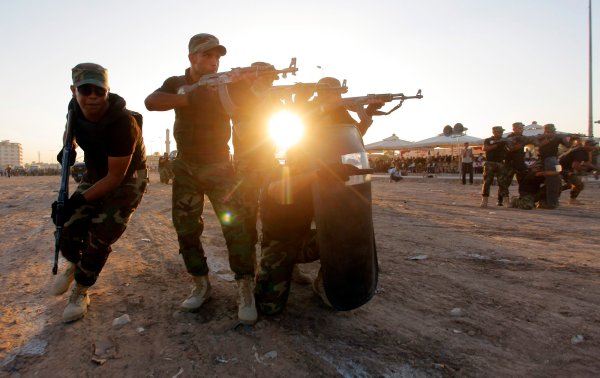 Obama Orders 350 More Troops to Iraq
Next Up: Editor's Pick