The Ghosts of Ron Paul Haunt His Son

Late last week, Senate minority leader Mitch McConnell’s campaign manager Jesse Benton quietly resigned. But the move won’t affect McConnell’s campaign so much as one that has yet to be launched: fellow Kentuckian Rand Paul’s anticipated bid for the White House in 2016.

McConnell had hired Benton, who worked for Ron Paul’s presidential campaigns in 2008 and 2012, and for Paul’s son Rand’s insurgent 2010 senatorial bid, for his connections to the Tea Party and grassroots activists. Unfortunately for Benton, it is those connections in the early voting state of Iowa that have gotten him in trouble.

The scandal goes back to the 2012 presidential race, when Iowa State Senator Ken Sorensen dramatically left Michele Bachmann’s campaign just days before the caucuses and endorsed Ron Paul. After a 31-month federal investigation, Sorensen finally admitted to seeking a $75,000 payment for the jump from the Paul campaign. He named Benton as the person within the Paul campaign with whom he negotiated. Benton has denied the allegations as “untrue” and “false,” but resigned nonetheless to spare “unfairly undermining” McConnell’s tough reelection.

Allegations that Benton and former Ron Paul 2012 Iowa vice chair AJ Spiker may have been involved in the scandal throw a wrench into the younger Paul’s campaign structure, as he had hoped to inherit much of his father’s political network. But there may be another shoe yet to drop. The federal investigation into the pay-for-endorsement scheme continues, and may seek to target other former Paul staffers involved. Repeated requests for comment from Paul’s Iowa staffers went unanswered.

The incident is just one of many this summer where Rand Paul—who owes his Libertarian political identity to his father—has had to reconsider shared staff or distance himself from his father’s positions. The outspoken three-time presidential contender is quickly cementing himself as his son’s greatest political vulnerability—and he’s not going away anytime soon.

While Paul-the-younger has been working to reframe his foreign policy to be more palatable to the GOP’s hawkish wing, his father has been making that task increasingly difficult. Speaking on the Money and Markets podcast, Ron Paul defended 9/11 “truthers,” adding that the federal government did more harm to Americans’ liberties than Osama bin Laden. “It’s politically very risky to talk about it,” Paul said. Though Rand Paul has skated close to truthers in his career, he’s never endorsed the conspiracy theory.

The disconnect between father and son was further on stark display this weekend when the younger Paul said President Barack Obama’s admission that he has “no strategy” to tackle ISIS in Syria meant “Maybe it’s time for a new president.” In a follow-up comment to the Associated Press, Rand Paul added he would seek congressional authorization “to destroy ISIS militarily.”

The elder Paul, however, celebrated the president’s candid moment. “A lack of strategy is a glimmer of hope. Perhaps the president will finally stop listening to the neocons and interventionists whose recommendations have gotten us into this mess in the first place! Here’s a strategy: just come home.”

There are many places where the two agree. For example both wrote op-eds excoriating the militarization of the police after the riots in Ferguson, Mo. But more often than not, they don’t. Ron Paul has called for clemency for Edward Snowden while his son says Snowden deserves a light prison sentence. Rand Paul has called for strong sanctions against Russia, while his father has opposed such sanctions saying they might “sink the U.S. dollar.”

And Rand Paul has yet to weigh in on his father’s comments last month that the U.S. had exaggerated the Ebola outbreak for profit, and that the disease should be treated with the banned pesticide DDT.

Clearly, the 13-term Texas congressman isn’t slowing down in his retirement. But he may want to tone the rhetoric down for his son’s sake, in case the sins of the father—or, in this case, the conspiracy theories—come back to haunt his son. 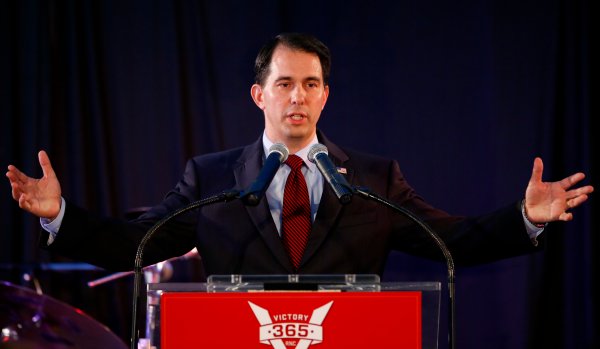 DNC Chair Says Republican 'Has Given Women the Back of His Hand'
Next Up: Editor's Pick