Lifetime’s biopic The Brittany Murphy Story hasn’t even aired yet and it’s already sparked a feud.

After clips and teasers for the TV movie about the late actress’s life were released — and roundly mocked — online, Murphy’s father Angelo Bertolotti began speaking out against the project, stressing that it was unauthorized.

“I am disgusted and outraged that Lifetime decided to produce such a trashy project, defiling the memory of my beautiful, talented daughter,” Bertolotti told Examiner.com in an interview last week about the upcoming film. “The Brittany Murphy Story is an affront to everything my daughter was in real life. It’s hideous, unauthorized and completely untrue.”

But Bertolotti didn’t limit his criticism to just Lifetime. He also slammed Amanda Fuller, the actress who is portraying his daughter, in a series of tweets this week from his Twitter handle @BrittMurphyDad:

On the one hand, the man has a point — the biopic looks terrible and depressingly low-rent. On the other hand, this isn’t the first time he’s caused a stir since his daughter’s mysterious death in 2009, which was officially ruled as an accident caused by a combination of pneumonia, anemia and a mix of over-the-counter drugs.

Years later, Bertolotti — who was reportedly estranged from his daughter at the time of her death — claimed to have an independent report that suggested his daughter had been poisoned. (Brittany’s mother, Sharon Murphy, called his claims an “insult.”)

Fuller, the actress playing Murphy—and the source of Bertolotti’s ire—defended herself and the Lifetime project. In an interview with The TV Page, she said, “It is what it is. All of our hearts were in the right place.” 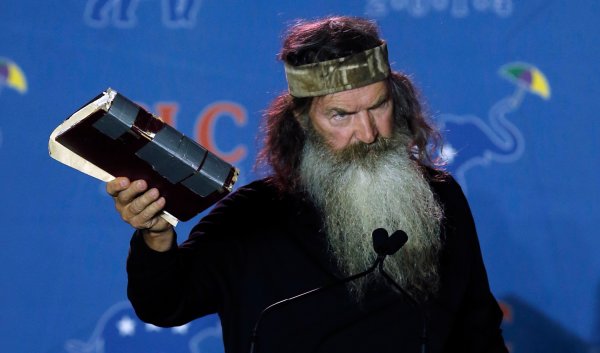 Duck Dynasty Phil: Convert ISIS or Kill Them
Next Up: Editor's Pick